Stephanie and Dash are heading out to the lake for an action-packed day of fun. Stephanie’s buggy and trailer are filled with all the essentials needed for a day of cycling, paddle boarding, tennis, and playing fetch. Stephanie has a great spot picked out right on the lake where she plans enjoy some refreshments and marshmallows with best friend.

This set was provided by the AFOL Engagement of The LEGO Group for the purpose of sharing set details with fans. Opinions provided here solely reflect those of our reviewer. Photographs are property of FriendsBricks and are not directed by TLG in any fashion. 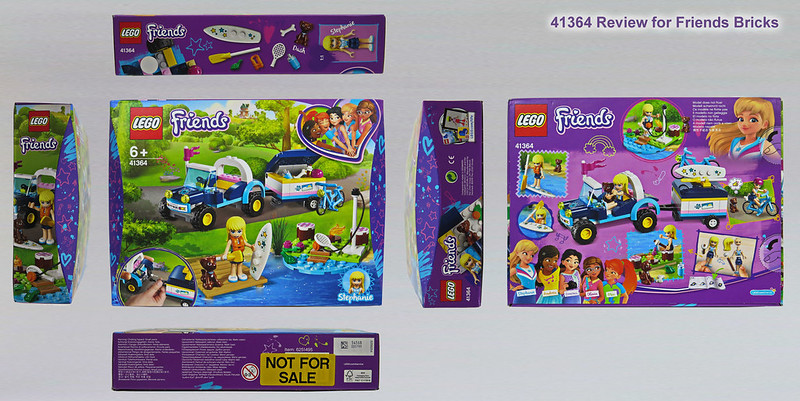 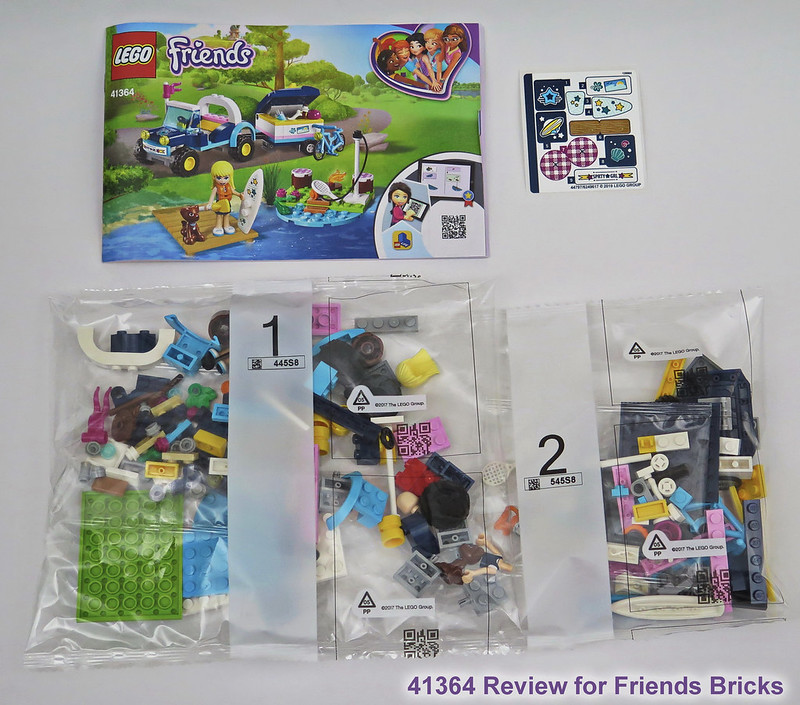 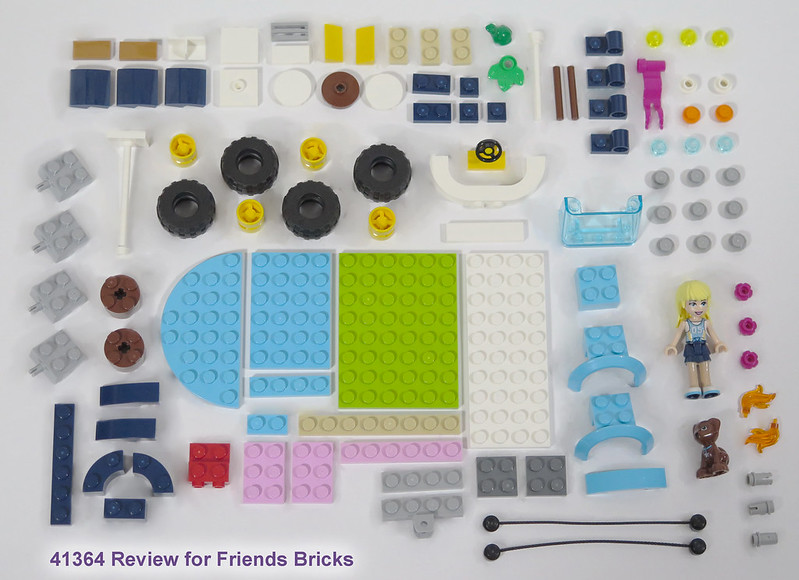 Bag one contains the parts needed for the Buggy, Campsite, a frog, Stephanie and Dash.
This is the first Lego set to include the 2x2 Macaroni part now available for the first time in dark blue (two are included)! 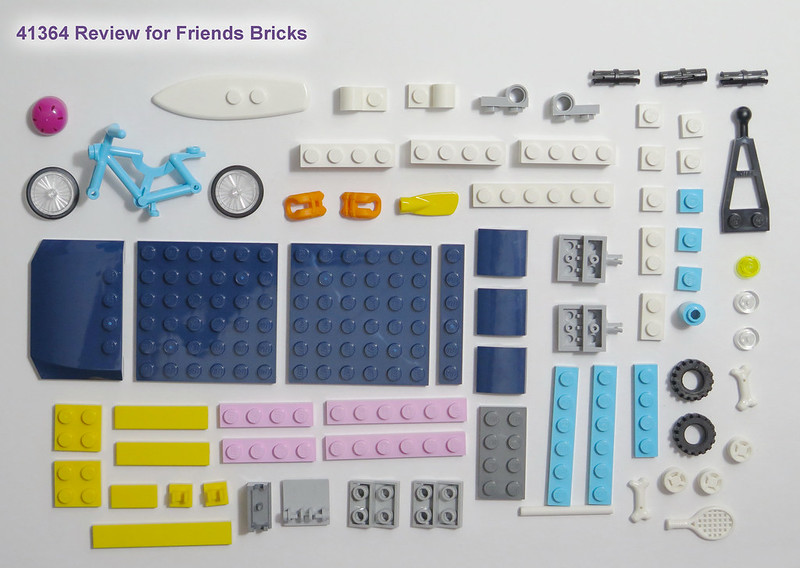 Bag 2 contains the parts need for the trailer and all of Stephanie’s sports equipment. 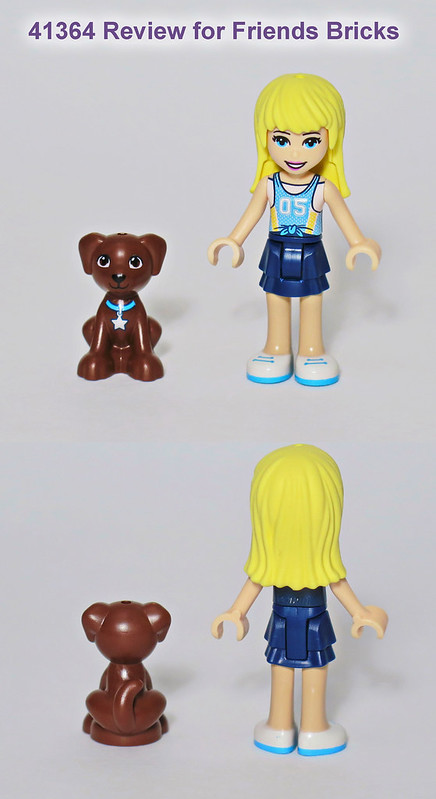 Above are a few close-up photos of Stephanie and Dash.  Stephanie’s jersey top has a great print with the number "05" on it.  This torso has a new print and is unique to this set!   Dash has a medium azure collar with a silver star.  This pet has appeared previously in the two sets, the 2017 "Puppy Championship" and in 2018's "Stephanie’s Bedroom". 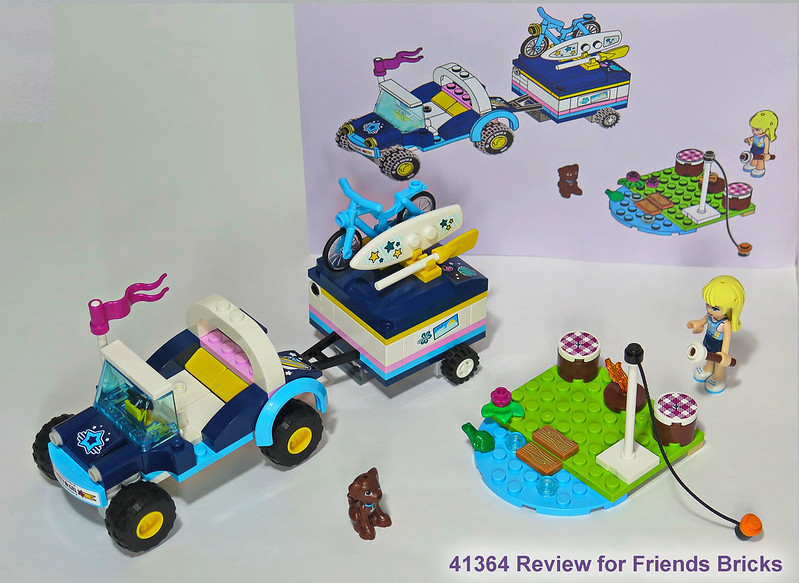 This set was an easy build presenting no surprises.  The only challenge was getting the stickers on straight! 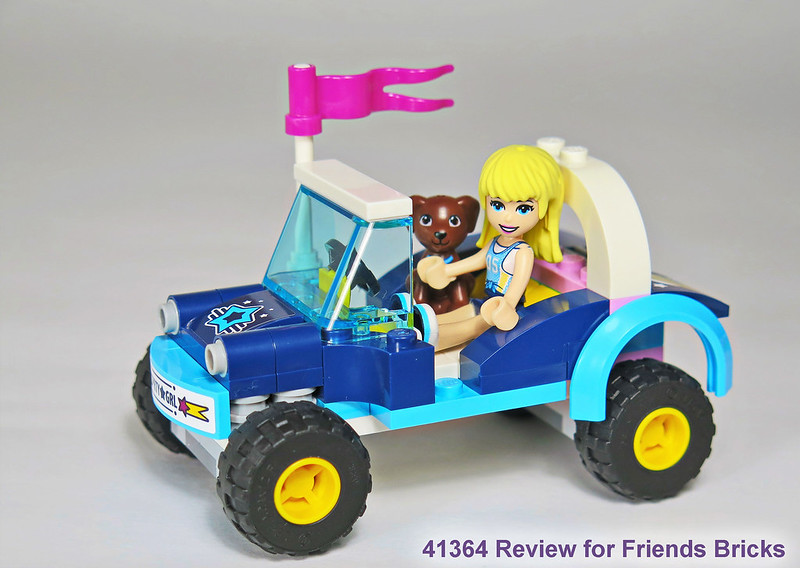 Stephanie’s buggy was a quick build and looks like it could be a fun ride.

I feel that the Lego designer spent a lot of time getting the buggy’s overall shape right, which I appreciate.  I especially like the hood detail and faux shocks at the front.  However, I am disappointed with the simplistic look and build from the windshield to the back of the car.   While functional, it does not have a very realistic look; I can only assume that some sacrifices were needed to accommodate the relatively small part count of this set. 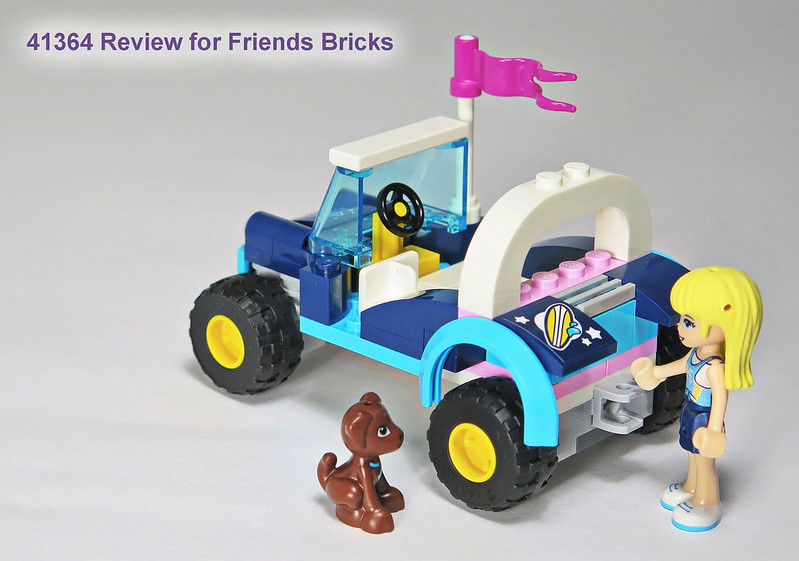 Here is a view from the back where the trailer attaches. 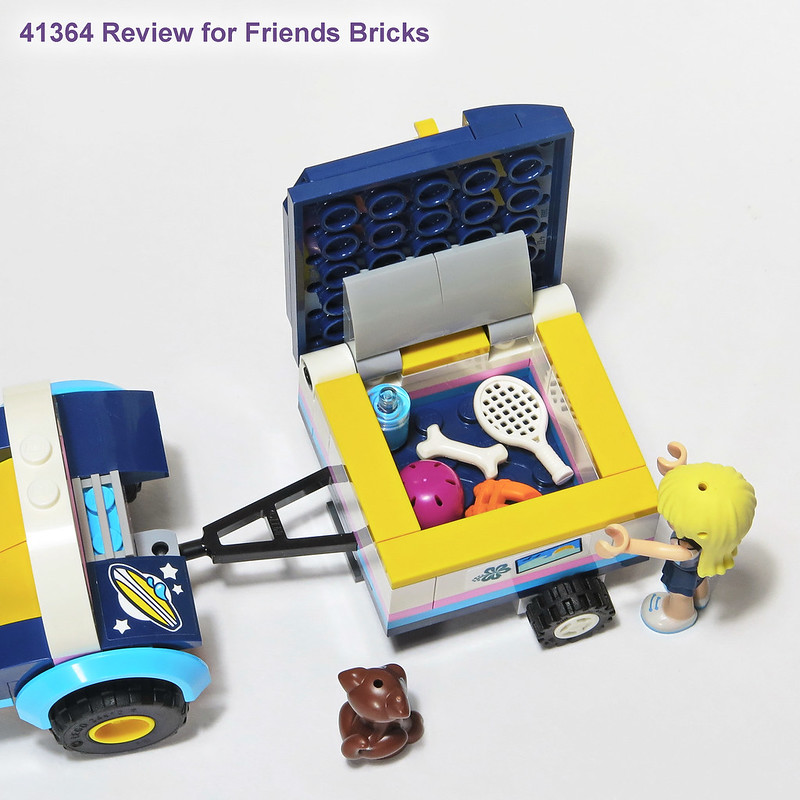 The trailer lid opens from the side and has a sizeable compartment to store lots of stuff.
Note: I altered the build moving the hinge to the front, as I prefer trailers that open from the back. 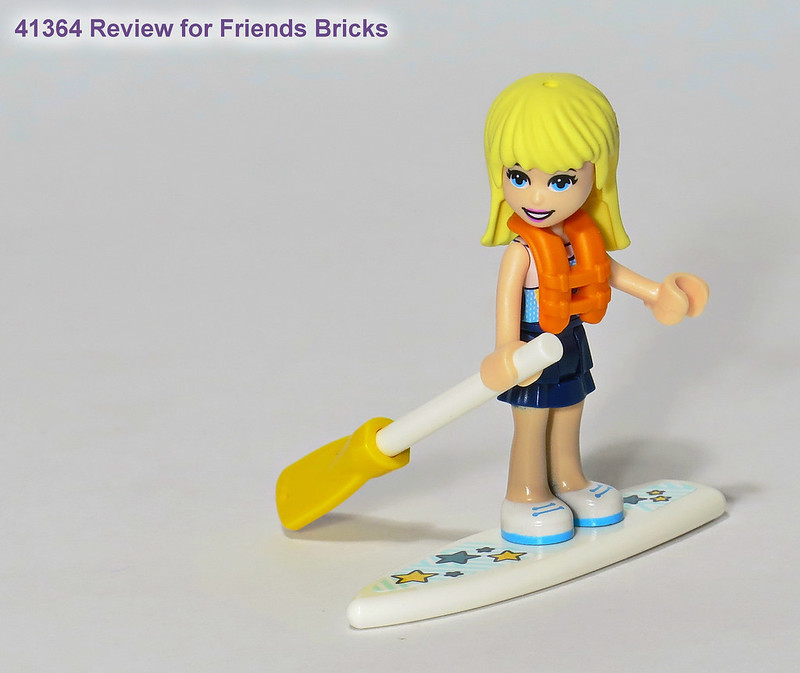 After unloading the trailer Stephanie went out paddle boarding.  She always makes sure to wear her Personal Flotation Device. 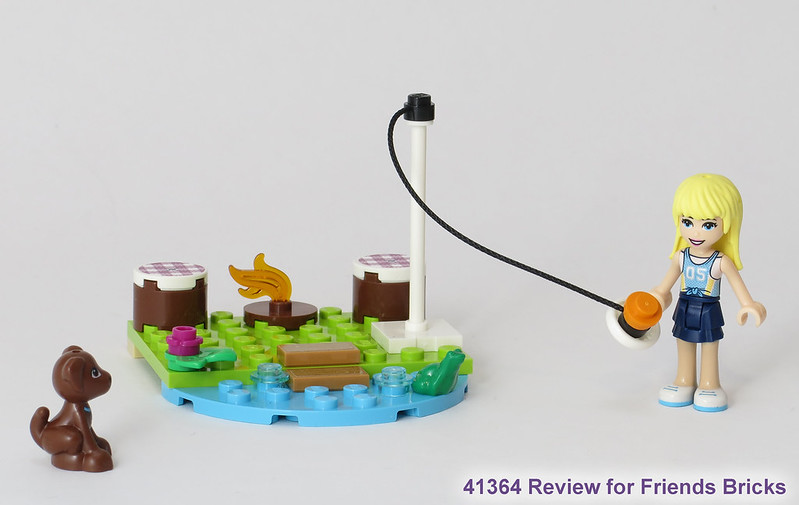 Here is an image of Stephanie playing a little Pole Tennis.   Dash is very focused, hoping that Stephanie will hit the ball in his direction.  A small green frog is also watching tentatively, hoping to stay clear of the same ball. 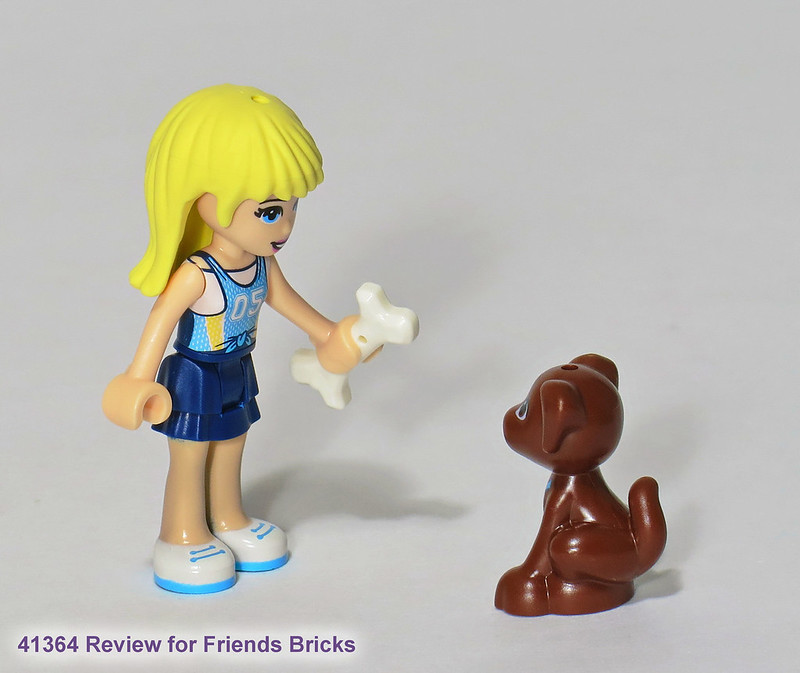 DASH GETS A REWARD:  Stephanie was not able to throw the ball to Dash, so instead offers a bone for being such a good and patient dog. 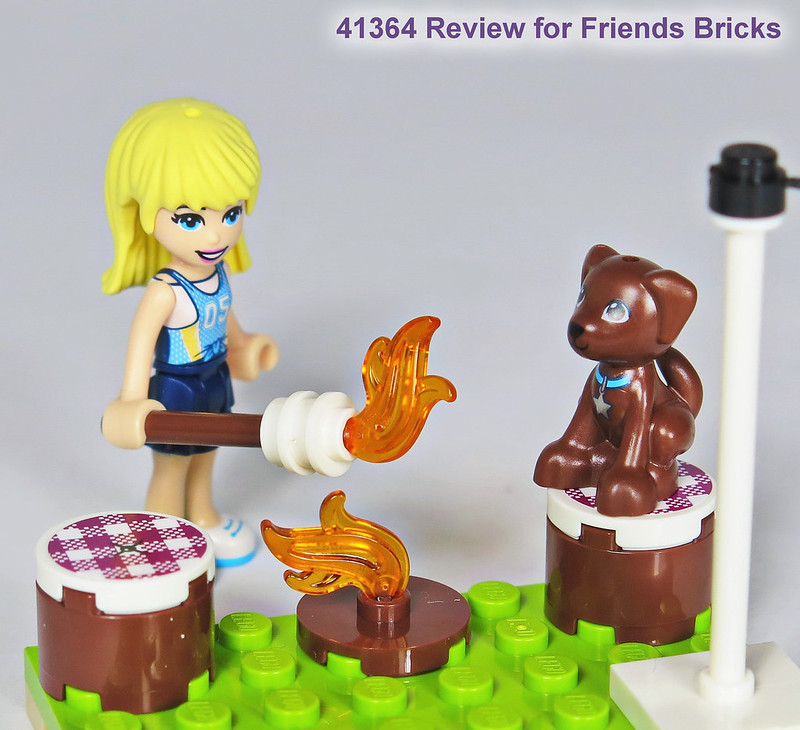 Back at camp Stephanie roasts a marshmallow, and this one is going to be extra well done. 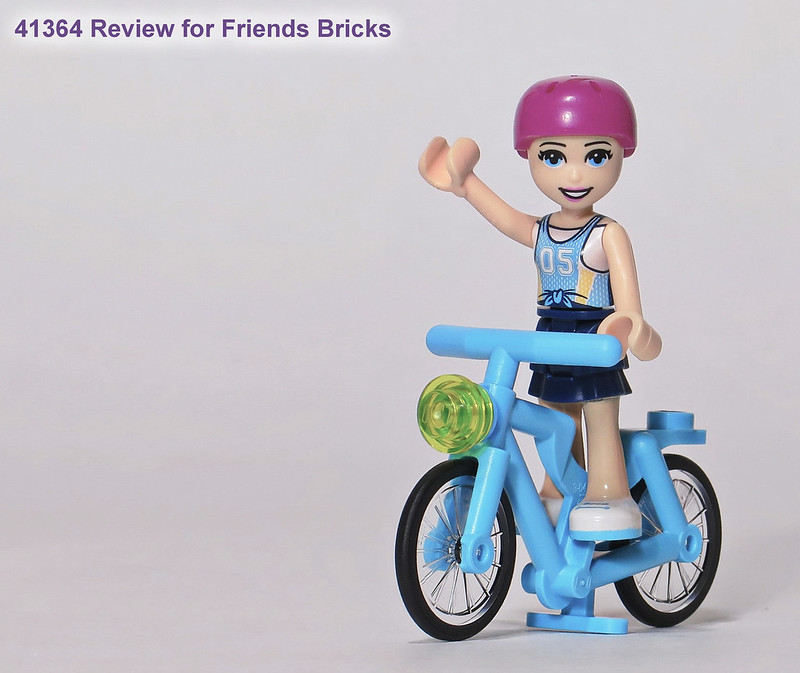 Stephanie also brought her bike along, as it’s a fun way to check out the sites around Heart Lake.

Final Thoughts about this set:

If you're looking for a cute little set with lots of play options this is a good choice.  There are lots of sporty accessories to choose from, and the beach camp site suggests both camping and beach related activities.  I would encourage getting together with a real friend and another friendly set and see where the play options take you!

However, if your focus is on getting another friendly vehicle you may want to consider Olivia's Mission vehicle, or the Service  & Care truck, which are available at the same price point.  I feel these vehicles are built better (IMO), are more realistic, and have their own play features which are worth considering.

I have mixed feelings about this set.  I really wanted to like it more than I did after building it, but when comparing it to other similarly priced Friends sets I already have, I find myself preferring the others.

I hope you found some valuable insights in my brief review of this set.
Thanks, Tyler

I like when they put hair on the helmets better than the ones without. Love the bicycle and Dash and the trailer. You could redesign the buggy.