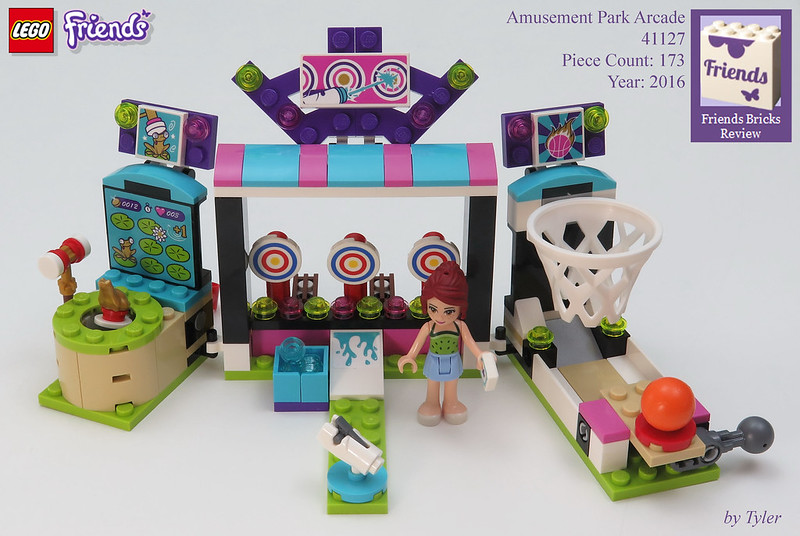 This set was provided by the AFOL Relations & Programs team (AR&P) of The LEGO Group for the purpose of sharing set details with fans.
Opinions provided here solely reflect those of our reviewer.
Photographs are property of Friends Bricks and are not directed by TLG in any fashion. 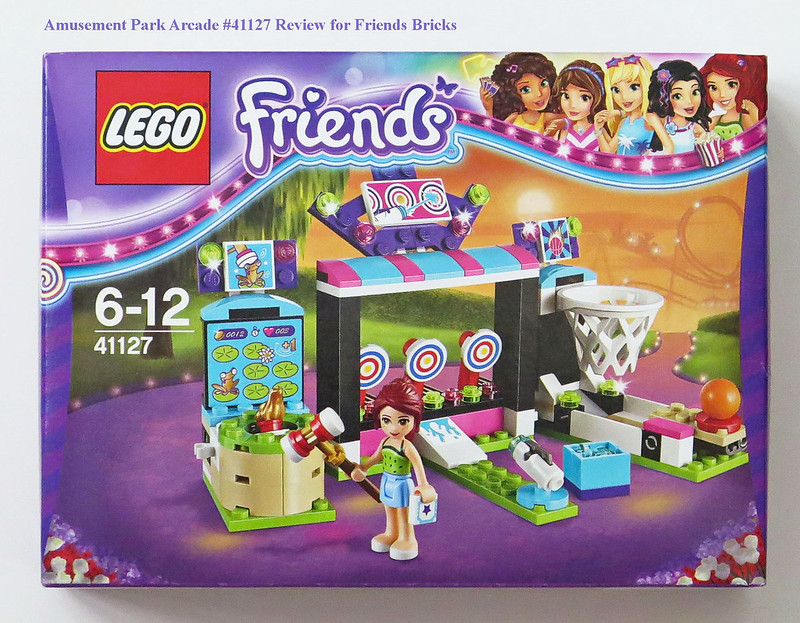 Front of the Box

The box is typical of Friends sets with beveled sides and pastel colors. The 2016 Friends “Amusement Park” themed sets are easily identified by the sparkling lights embedded into the ribbon banner. On this box cover you can also see a roller coaster in the background. There is also a lit path that leads to other areas of the park.

The sides of this box are typical of all Friends sets, including the usual Warnings, Friends logo and the set number. The right side of the box shows the sparkly ribbon banner wrapping around from the front to the back of the box. 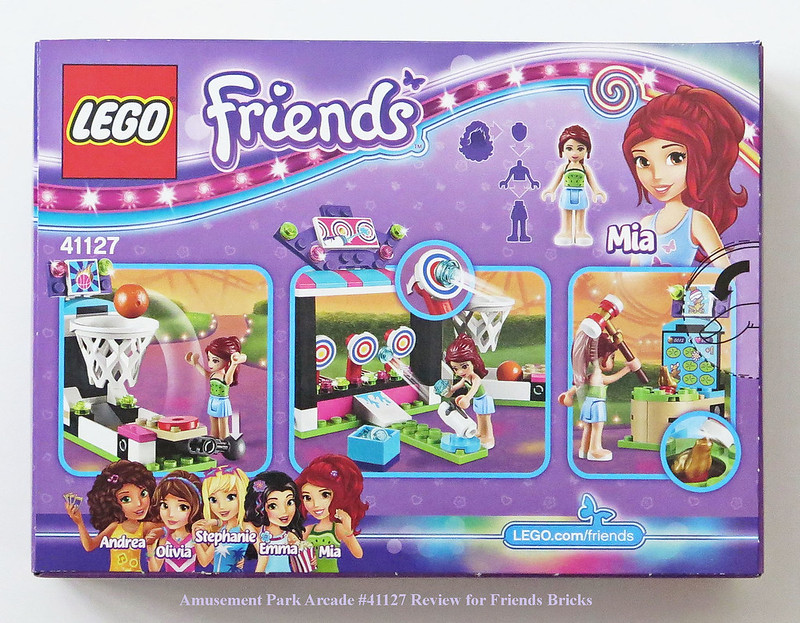 Back of the Box

The sparkly ribbon is also displayed on the back of the box. The usual BFF’s can be seen at the bottom left wearing their Amusement Park themed attire. Mia is wearing a light green tank top, with dark green dots across the front of it.

In the middle of the box, each mini-game is highlighted showing off their action features. Mia appears to be having a ton of fun!

Seeing these action photos make me want to rip the box open and start building this set right away! So let’s do just that and see what’s inside the box! 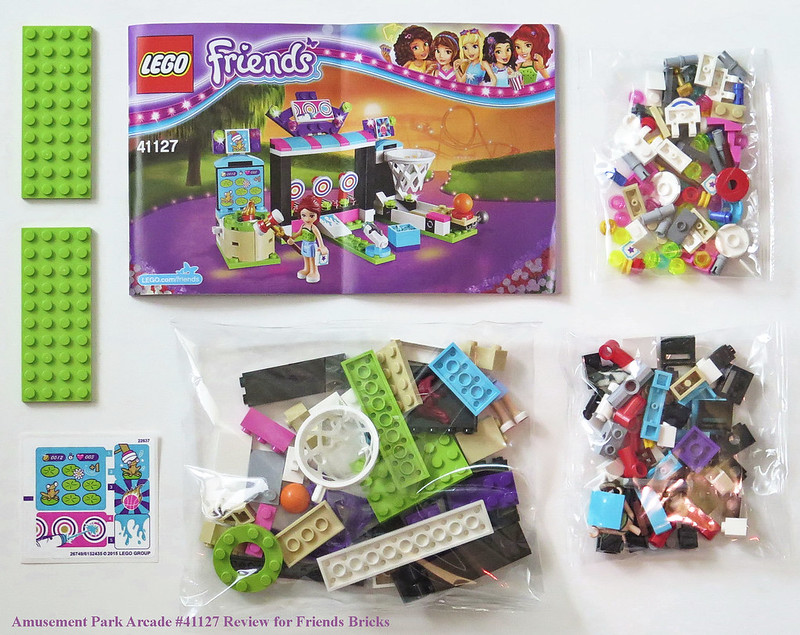 The box contains three parts bags which are NOT numbered, an instruction book, two 4x10 lime colored plates, and a small sticker sheet.

The parts packages contain a mix of pieces needed for each sub build. The parts count is relatively small, so I recommend simply pouring all the parts onto a standard sized dinner plate, setting the large parts aside, and then loosely grouping the small parts by color, making it easier to find the ones you need.

I won’t be describing the actual build process for this set, other than saying there are no surprises, and the instruction book was very easy to follow. Even young builders, who may not have made too many mechanisms with Technic bricks should be able to follow the steps.

The instruction book is broken into three sections, one for each game. So if you want you can build the game that most interests you first, by just flipping to the appropriate section and then start building from there. 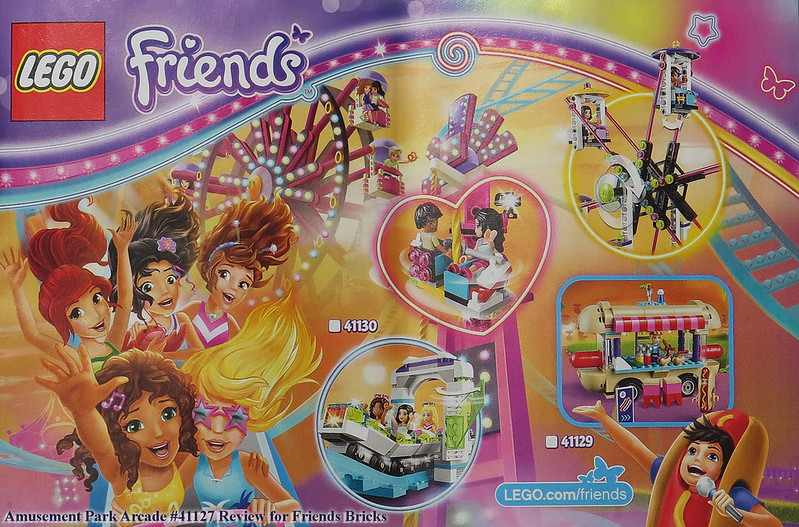 The instruction book does contain one page near the back with a very nice image of all the girls enjoying their time at the Amusement Park.  The inset images show some details from a few other Amusement Park themed sets. 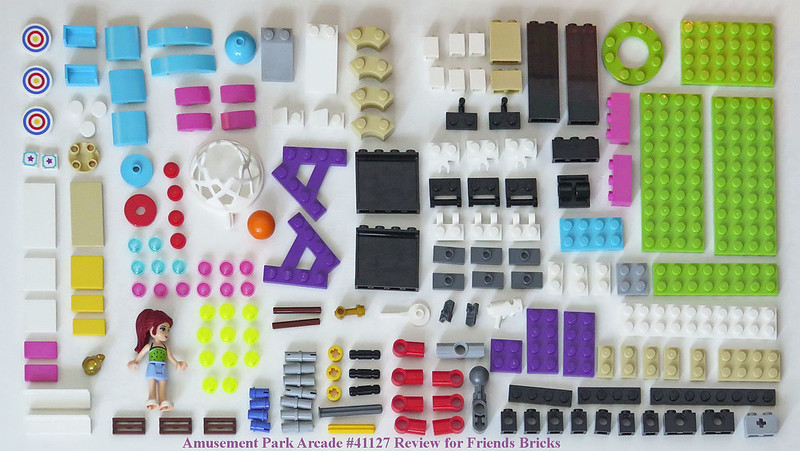 All of the parts in the box

Quite a few Technic related parts are included in this set. A few more than a typical Friends set, but not totally unexpected based on all of the play features identified on the box. I felt that getting a gold colored frog was a nice touch, as it could have just as easily been green.

This set includes a variety of useful parts, making it a really good parts pack. If you like to build your own creations (like I do) you will appreciate this. 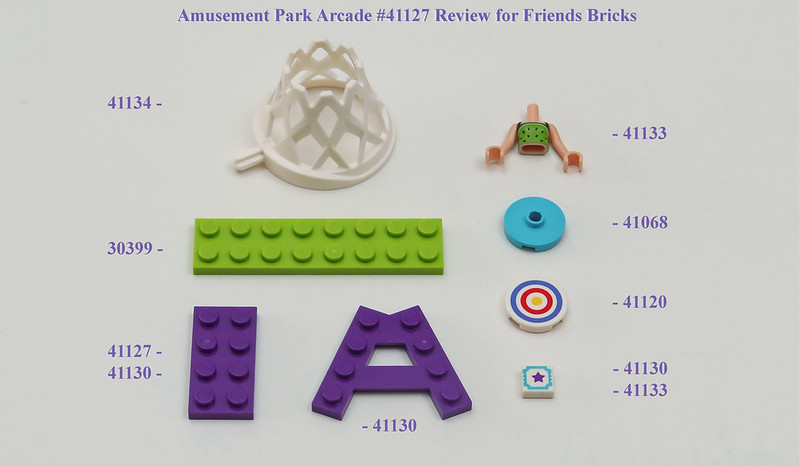 While there are no unique parts in this set, a number of these parts are new for Lego in 2016. The above parts are good to get as they are only found in one or two other sets besides this one (41127) so far. The other set numbers are identified above in case you want to look them up. I am hopeful that Lego will continue to release these useful parts in more and more colors in the future. 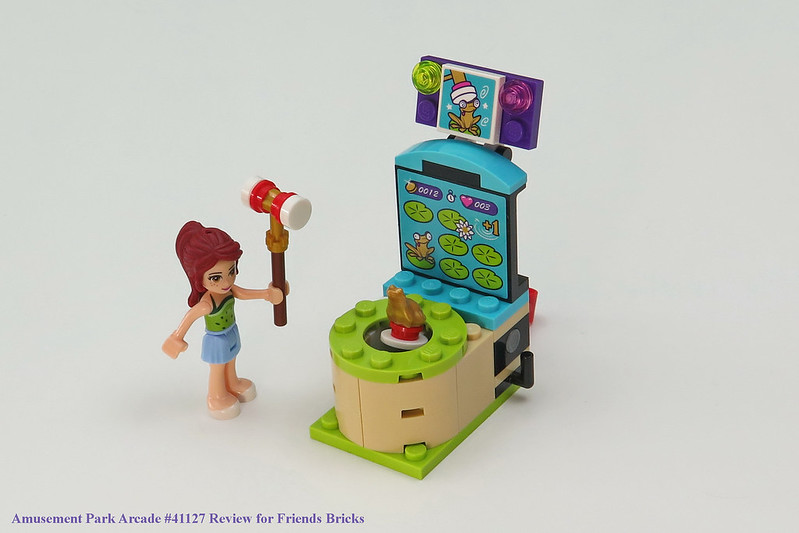 The first game in the instruction book is this fun little FROG BOPPER game.

Every time Mia bops the frog it goes down and then comes right back up. It’s a cool little idea and well executed, working every time. I would have liked to have seen more than one frog to bop, as that would be a little more realistic, but for a set of this size its adequate and provides a fun play feature.

There are two big stickers used here. While I’m not a huge fan of stickers, these two definitely contribute to the good looks of this game.  The highlight for me on this little build has to be Mia’s hammer. While its not complicated its well done and looks good in this scale. 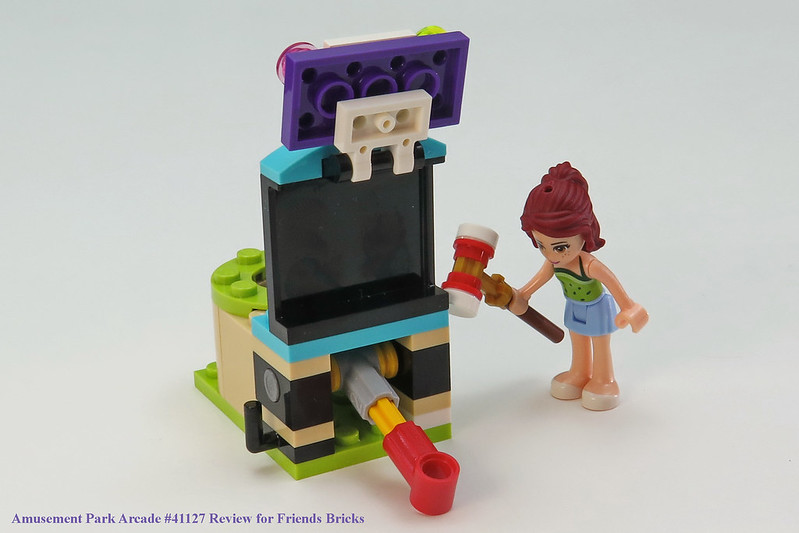 Mia couldn’t help herself and went around back to discover why the poor little frog kept coming back up for more, after every single hit. She discovered that the mechanism used is a simple and effective counter weight. Now that her curiosity has been addressed, its time to move on to game number two. 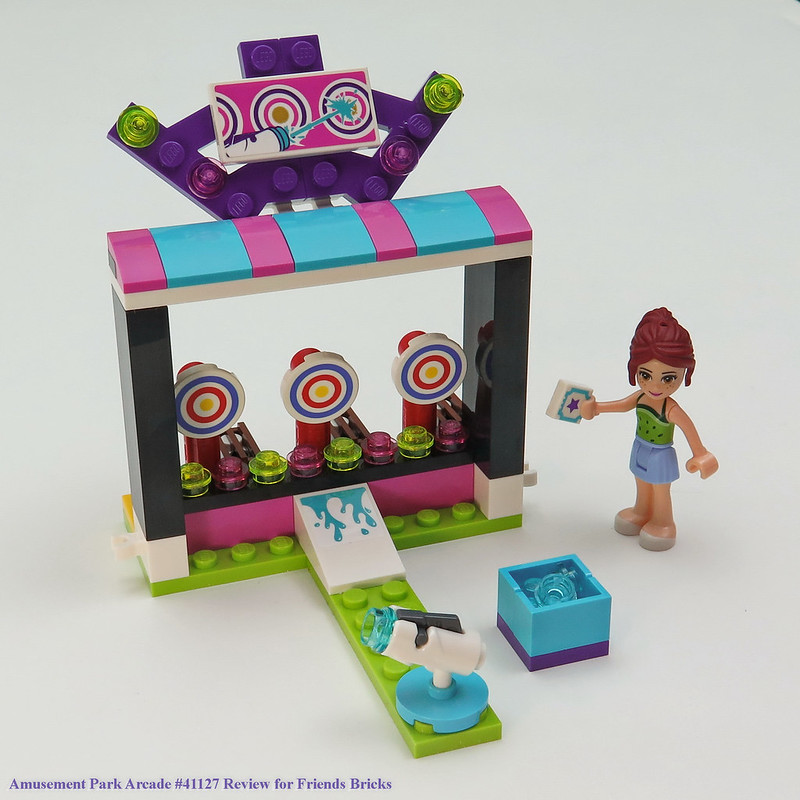 This should be tons of fun! Mia gives up her ticket and heads over to the gun, taking a few water balloons(?) with her to load into the gun.

This game is brightly colored and includes two stickers. The larger 2x4 sticker is needed to clearly identify this as a water gun game. The smaller one while supporting this as a water feature, really isn’t necessary, and I feel that skipping it does not take away from the overall appearance. 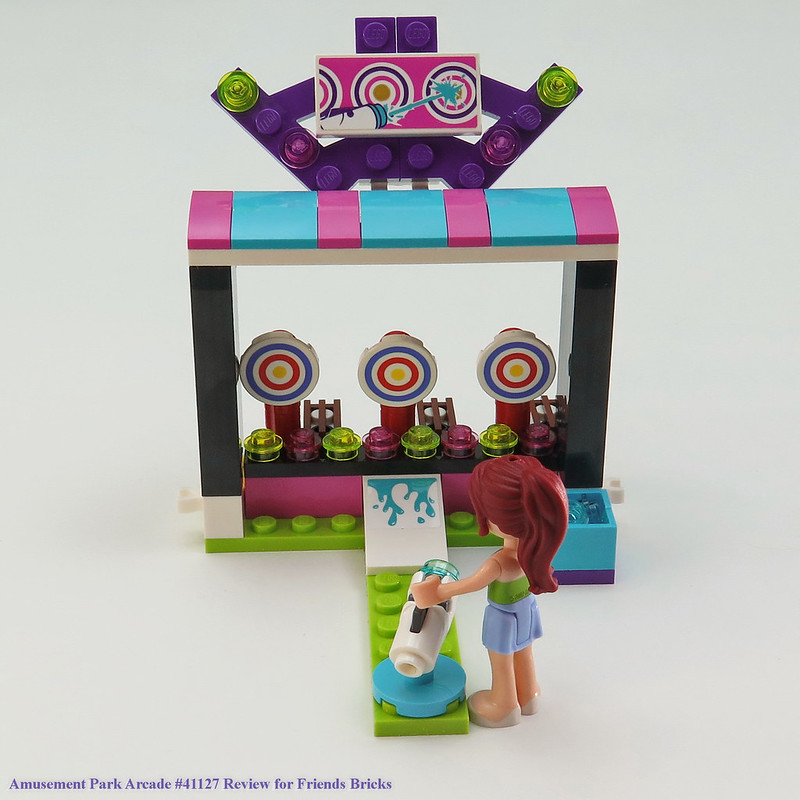 After carefully aiming the gun, Mia fires… and just like that the target goes down! Wow, that was easy, lets try another one! Firing a second and third time, Mia has easily knocked over all of the targets! Mia has determined that she is very good at this game. Was it just beginners luck? Where are the prizes? Oh well, that was fun, Mia wants to try it again. 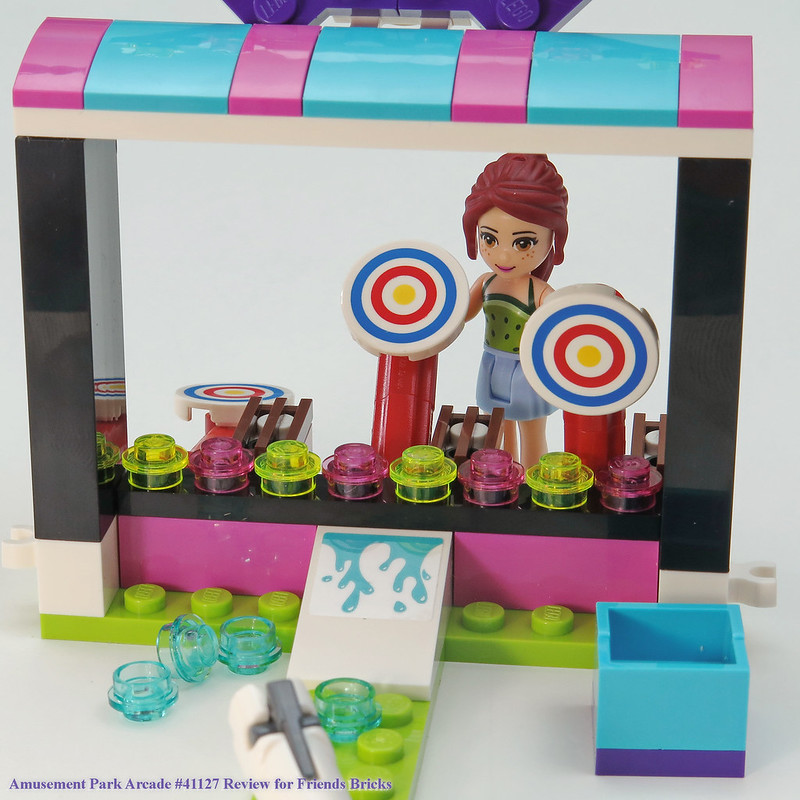 Since there is no one around to reload the game, Mia takes it upon herself to raise them back up and reload the water gun. Mia is equally successful on all of her subsequent attempts, and begins to think that the game is rigged. But why would it be rigged to win?

Reveling in her mastery of the water gun, Mia moves on to the last game hoping for a bigger challenge. 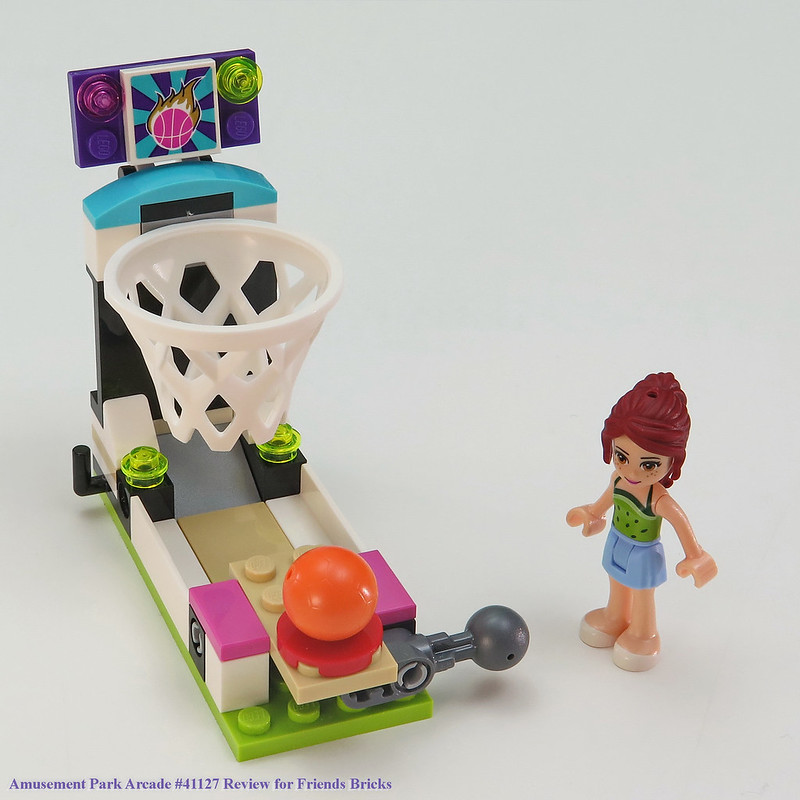 This last game appears to be a hoop shot, but what’s up with that lever on the side? Mia has no way to operate that on her own and will probably need some help.
This game uses a single sticker with a picture of a ball on fire falling downwards. 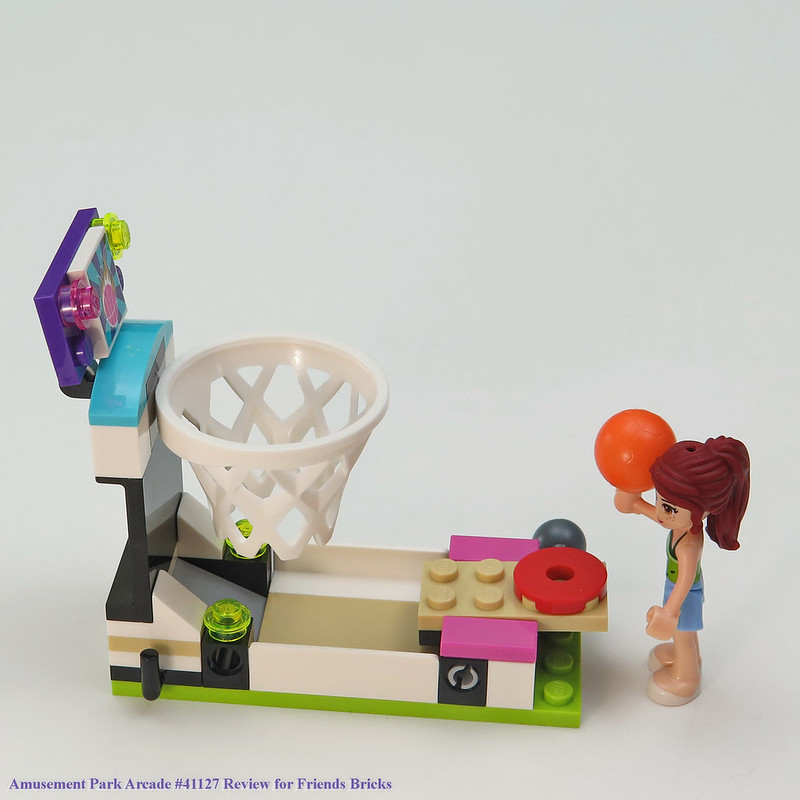 Not being big enough to press the lever all by herself, so Mia decides to take the shot from the end. 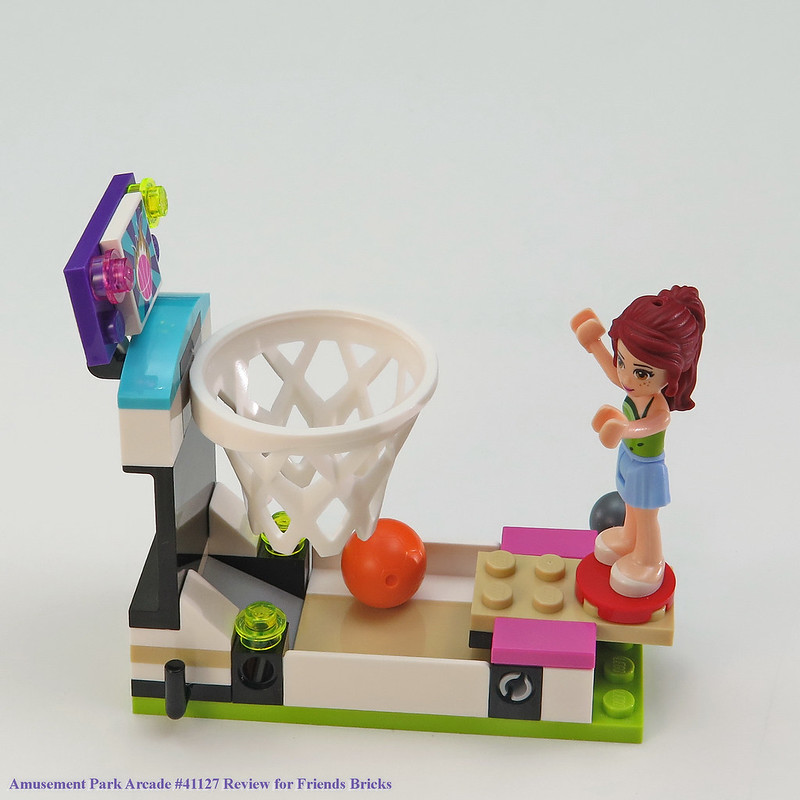 Another fun little game, this one requires just a little more skill than the first two, but not much. 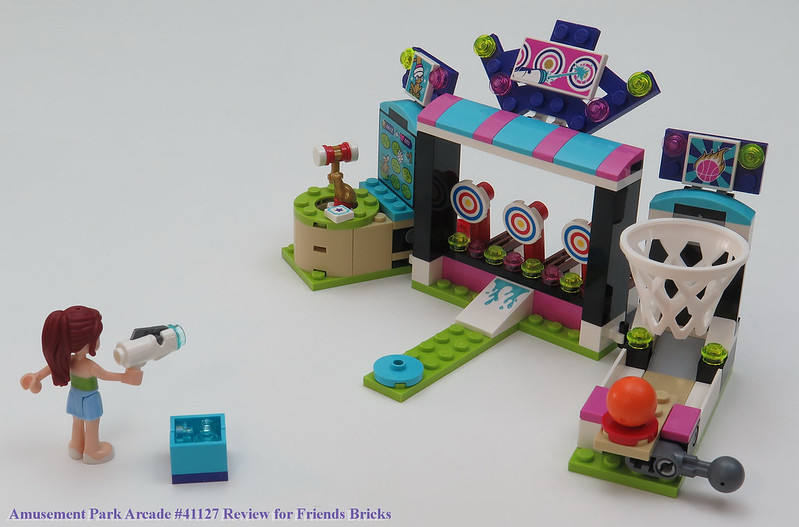 All three games can be connected together using the clips and pins built into their sides.

While all of those games made for a fun day, Mia decided to go back to the Water Gun one more time. This time, just to make things a little more interesting she removed the gun from the mount and backed up a little to make it a bit more challenging. Mia looks forward to coming back with her BFF’s in the near future!

For a relatively small sized set, this one provides a fair amount of play-ability across the three games included. The games are designed to be quite sturdy and won’t easily fall apart, even with some rugged play. They have been designed in such a way that it is hard to miss when used as built. While this may provide for some immediate gratification, it quickly becomes uninspiring. I recommend builders make changes on their own to move the position of the water gun, and the hoop, for instance, just to increase the level of difficulty, and extend play-ability.

This set is good for younger builders who may be interested in Lego sets with built-in play features. Teens will likely get bored with the action features, but the games do look good so would make a great addition to any Lego Amusement Park. Finally, Adult Fans of Lego should consider the parts list, as they may see some parts here that they like, just as I did!