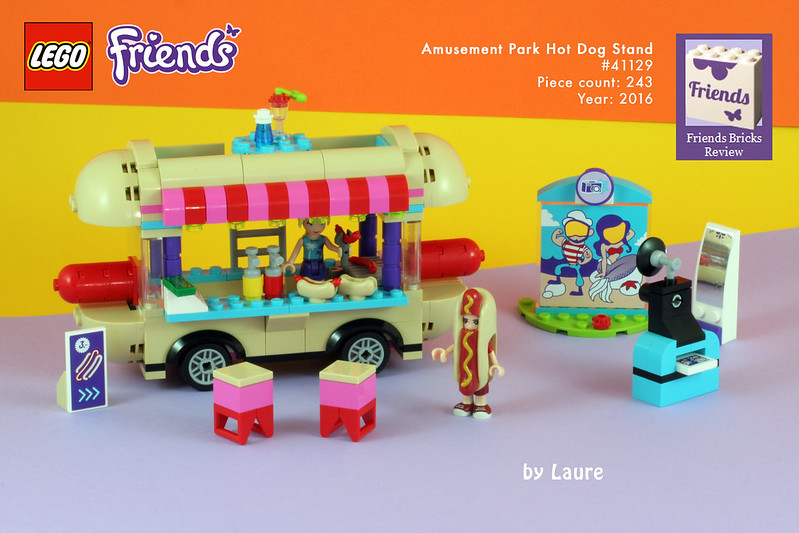 Summer is almost here, time to take a break, the amusement park is open late, time is just about right to go check out the wiener shaped hot dog stand!!

This set was provided by the AFOL Relations & Programs team (AR&P) of The LEGO Group for the purpose of sharing set details with fans.
Opinions provided here solely reflect those of our reviewer.
Photographs are property of Friends Bricks and are not directed by TLG in any fashion.

I hear the word is that reviews should be geared more towards AFOL's than children (that's Adults Fan Of Lego!). In this day and age, I wonder what makes us adults buy and play with LEGO. The news around us are quite dreary and there is always this one special place where one can escape reality and let their imagination flow freely, reconnecting with the innocence, I want to say candidness, of childhood. Whether we like to collect sets for display or reuse parts to build our own fantasies, we are all big children at heart and we should never forget that. In reviewing the two sets I have on my to-do list, I will do my best in staying faithfull to my inner child. Without further ado, lets see what these sets that were on the top of my list this season have to say. Starting with #41129: the Amusement Park Hot Dog Stand. 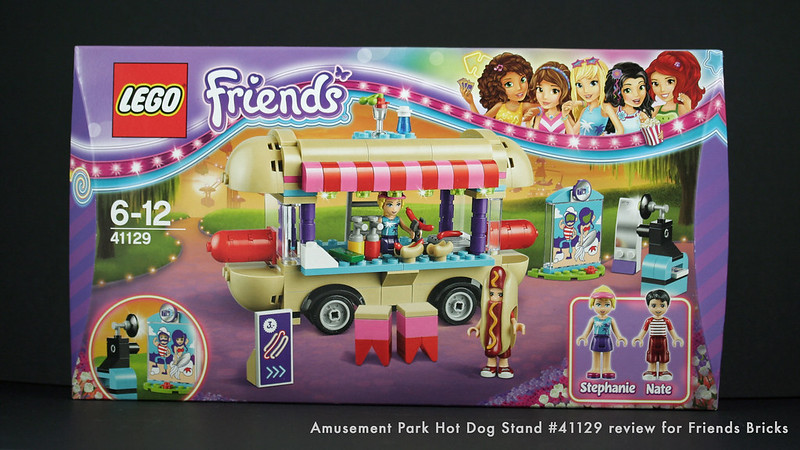 As mentioned by my fellow Friends Bricks reviewers, the lit up glittery ribbon makes the amusement park sub theme instantly recognizable. We've witnessed other LEGO parks like the 76035 Jokerland or 10247 Ferris Wheel and I find it really cool to develop that idea in one of LEGO's own licenses. And since there are quite a few different sets to chose from in that range, it makes it a wallet friendly theme as well that should be able to please boys and girls alike. 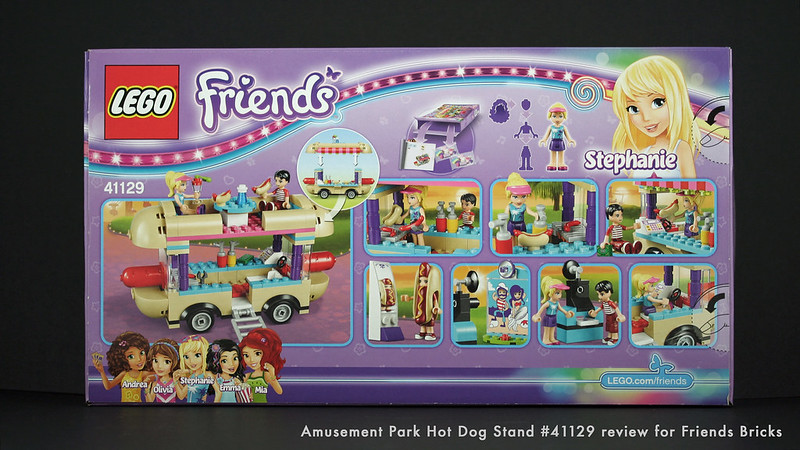 There are many reasons why I chose this set. I could tell from the back of the box it would be full of groovy accessories and surprises. Let's not waste any time scanning the box again, it's been sitting around for a good week, that's how busy I've been, I let the urgency come, now that it's here, let's open it up already! 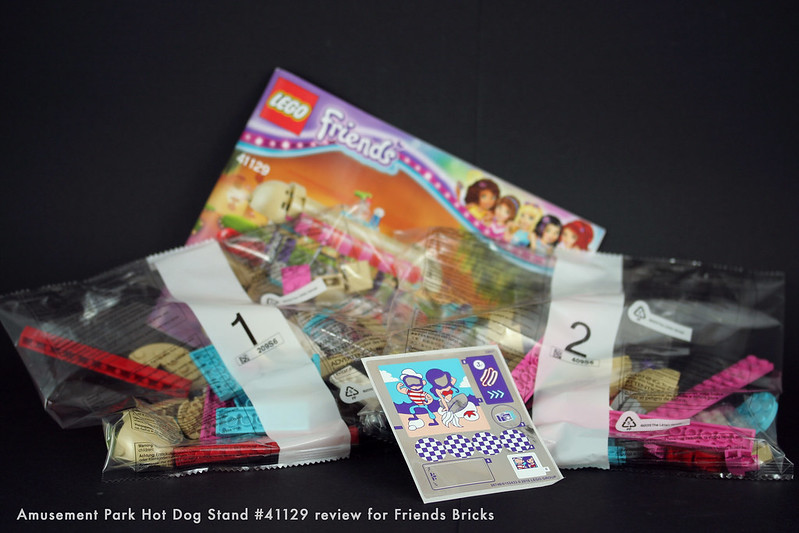 There are two numbered bags, one booklet, and a single sheet of stickers. That's not so bad, although my hands have been shaking lately, I hope I can apply them smoothly. 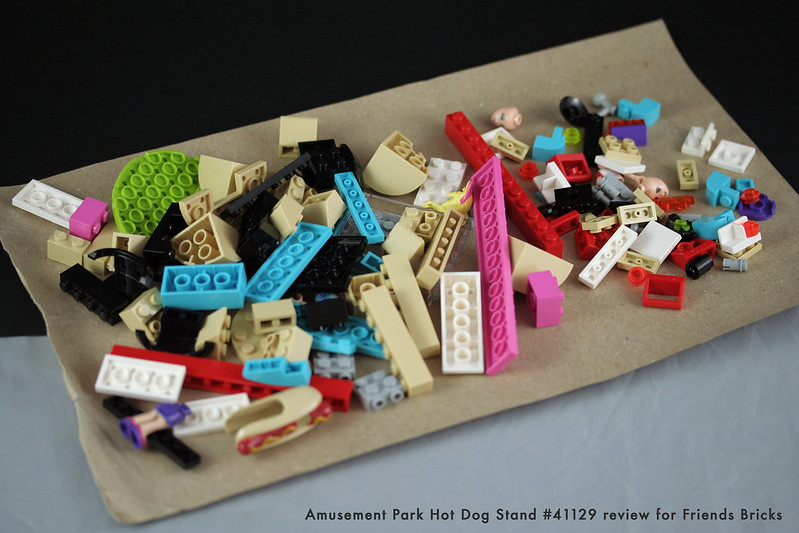 Bag number 1. I don't feel like sorting out the parts neatly, I would rather dig in like I would have done as a child. You do get a good glimpse, though. I will however zoom in later on some of the interesting parts. 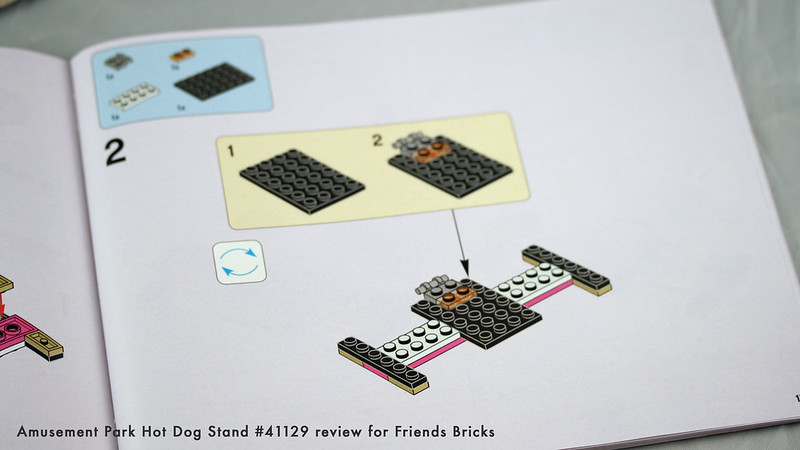 We start by building everything that's not the hot dog trailer. Figurines and side items. When we do get down to it, though, I spotted a mistake in the booklet. Usually, when that happens, I end up realizing I'm the one who made a mistake, but in this case, instructions call for a 2x4 white plate that is non-existant and never proves to be missing later on. It will forever be a mystery unless one of you faithfull readers that acquires the set can prove me wrong, in which case, please do!! 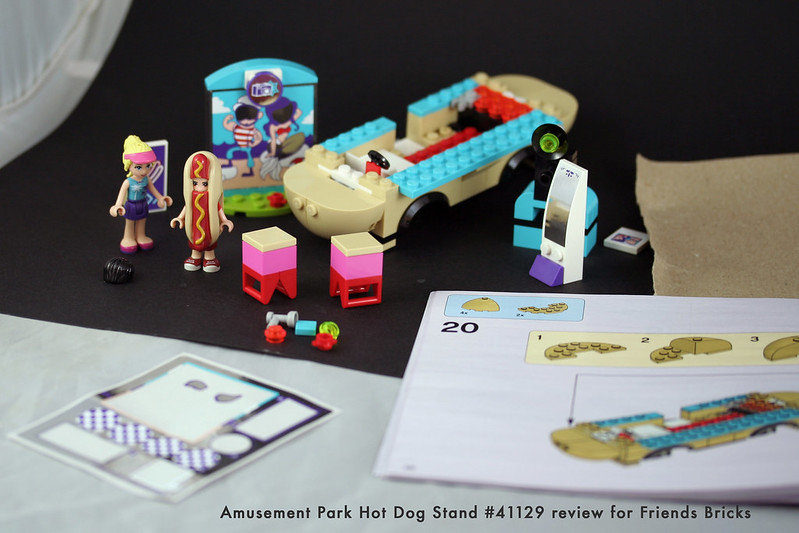 Here is what we end up with halfway along the ride! 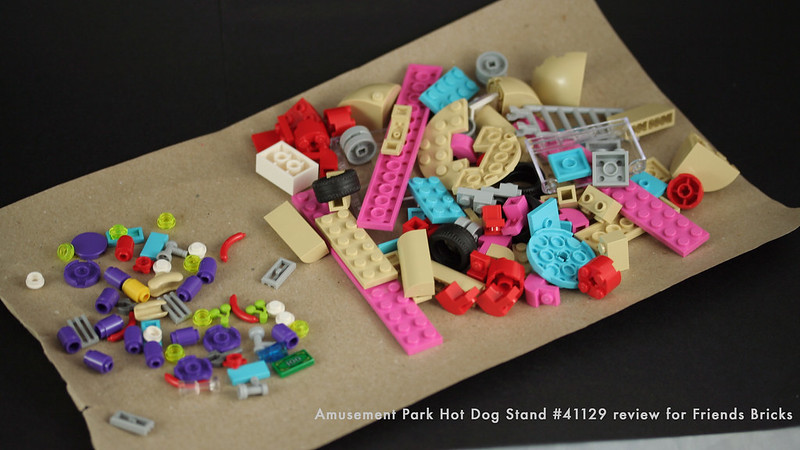 Let's continue on. I enjoyed digging in to find pieces I needed, I will do the same for the second batch! 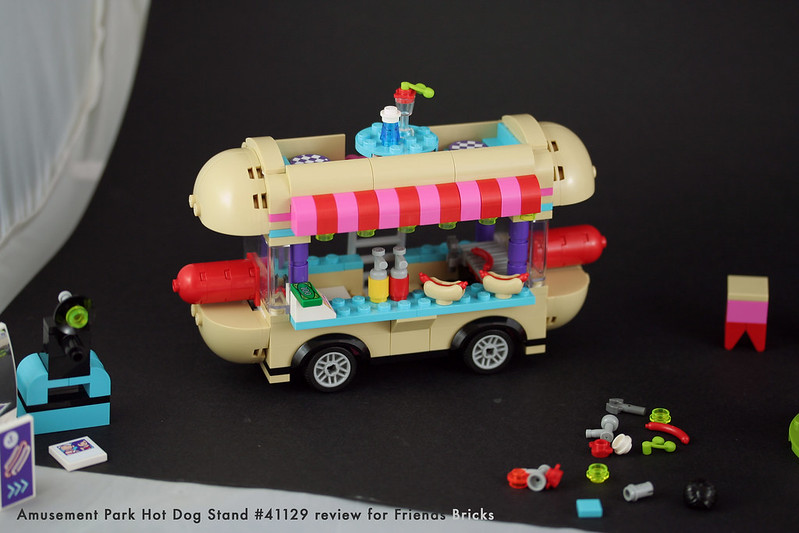 And here is the finished hot dog stand! Even though I checked out visuals of the set on the net, I still managed to be surprised! I probably saw it at the time, but I must've forgotten. There's actually a duplex terrace on top! How could I have missed that? I have no photograph to prove it, but there is a ladder in the back for the most adventurers to climb up. Having myself worked in a previous life on an itinerant food stand, I feel sorry for whoever will have to go clean up up there at the end of the day! Nonetheless I find it unbelievably cool! 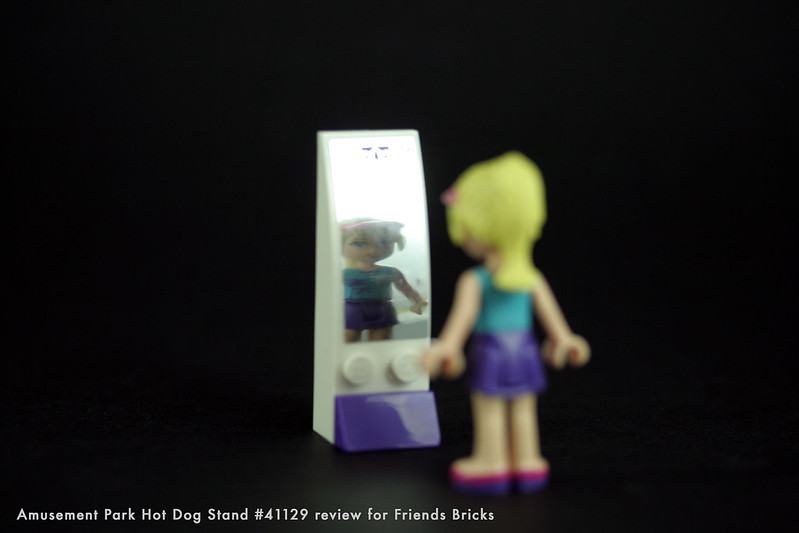 I realized I remained quite mysterious in the contents of this set. Let's take a closer look now if you please. Remember we're at the amusement park, and we're never too far away from fairground activities. Here is the classic distorting mirror! 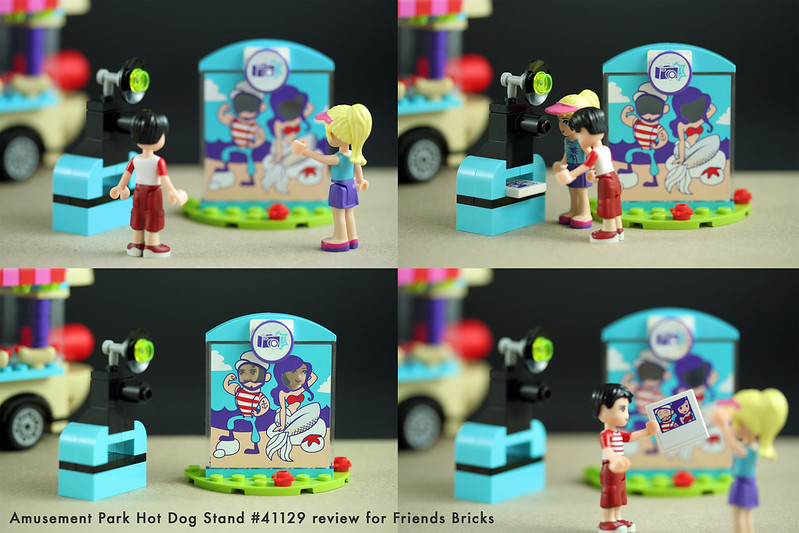 I usually don't use stickers when I build a set, because within an hour, the parts are neatly organized in my LEGO drawers. Having to write a review is a good chance to see the a set in it's full play potential. I would have totally missed on something right here. My imagination went wild as you can see. And, in fairyland, a camera doesn't have to face the subject in order to take a good picture!

More views of the hot dog stand. You can see the removable top makes for easy access to the inside of the stand for max playability in true LEGO fashion!! 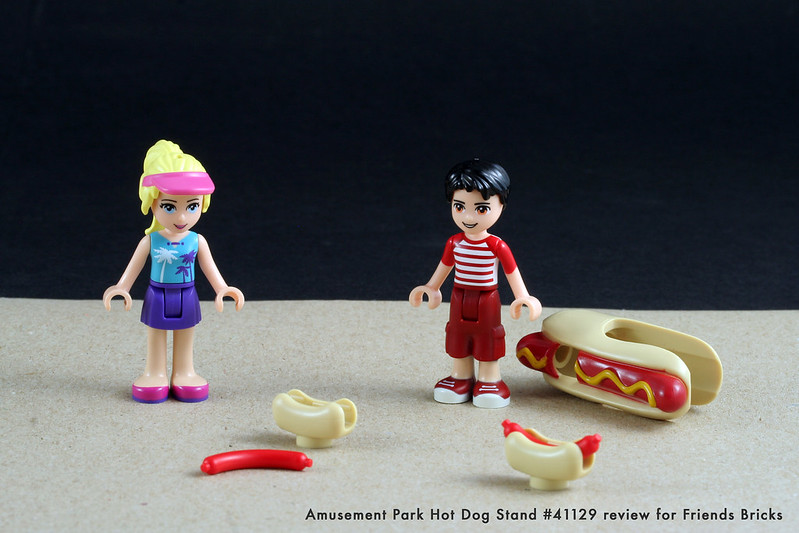 Finally show me some figurines, I know you're thinking! A new top for Stephanie and some new shorts for Nate. And for those who missed the hot dog man classic collectable minifigure (71008), fear not, the hot dog suit fits minidolls perfectly, as this set proves. But now, we also have a hot dog bun to fit the already existing sausage. I have to say though, that it doesn't fit very well in a minidoll's hand. When playing around with it, I constantly had to put it back on. Eithar that or Stephanie wasn't very hungry!! 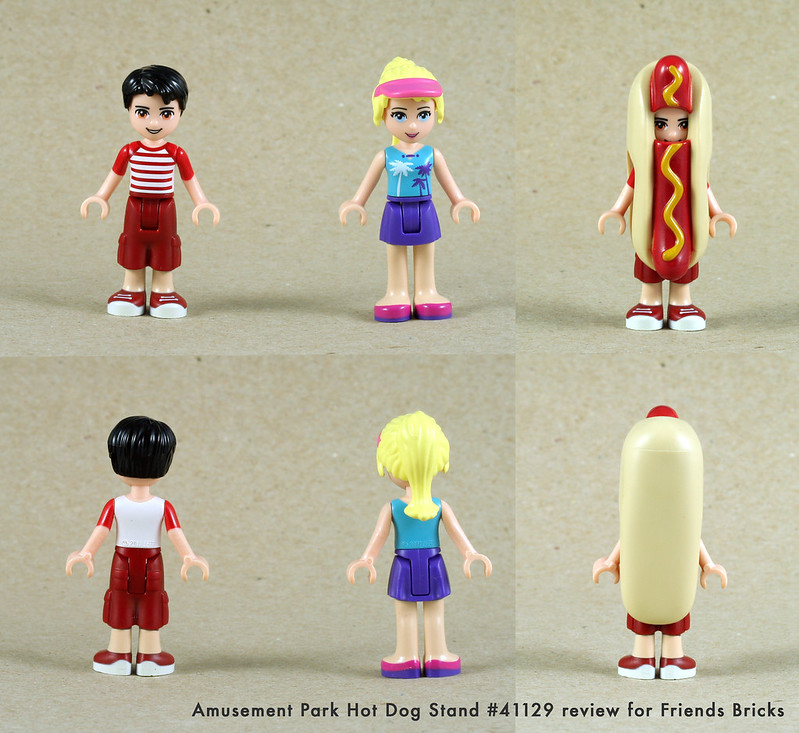 Here are some more neutral photographs of the figurines. Stephanie also looked very cute in the hot dog outfit, but it matches Nate's outfit better! 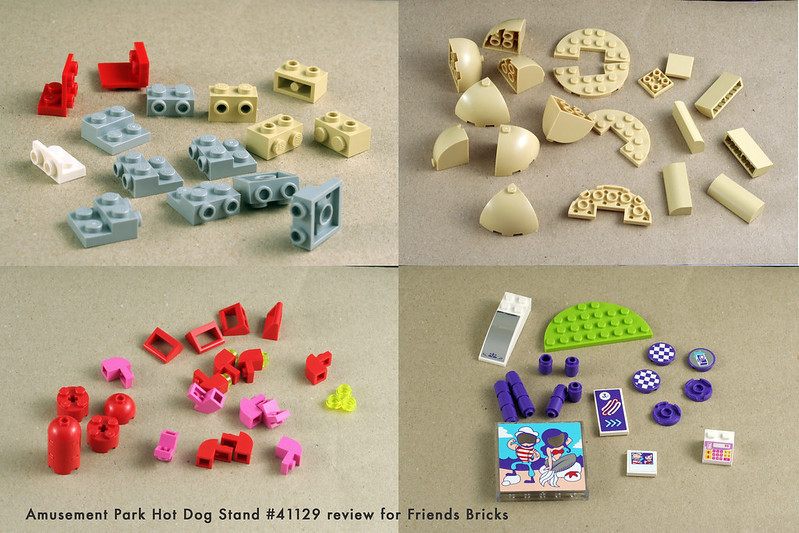 Top left are all the SNOT pieces included in the set (studs not on top). I can't stress how important SNOT pieces are when building your own creations. They're always good to have.
Top right are some pieces in brick yellow (tan) that are not new, but fairly recent and not too common.
Bottom left, I had to point out how the red round bricks and dome are absolutely perfect for a good old fashioned hot dog, and the bright red and bright purple bricks with arch are also good building companions.
Some new parts in the bottom right. The bright yellowish green half circle plate, the medium lilac 1x1 round brick and 2x2 round flat tile. Can't believe they didn't exist before! The rest are some neat stickers and the new cash register introduced recently in other sets.

All in all, I think I picked this set for reviewing purposes wisely, I followed my instincts and am clearly not disappointed. I am not sure I ever build sets as a child, since I used to like really small Fabuland sets, with just a figurine or two. Maybe my older brother used to build them for me, or my dad. I used to like mixing B-dolls with Play-billy and LEGO. This particular set has full recycling into something else potential as well as room for imagination if keeping it as is. I hope I managed to make you drool, thanks for reading. And thanks to Friends Bricks admin Susan for her full moral support.
Posted by fujiia

My girls and I have been eagerly waiting for the release of this set, and now, after reading your review and oogling at pictures of the build, we simply can not wait any longer!! I will be the crazy lady waiting for the Lego store to open come August 1st.
And thank you bringing to light why it is that I have found myself particularly more obsessed with Legos (more so than my daughters) over the past year. It truly is a mental escape for me from the troubling world news as of late. Where I can find comfort and release by feeling excited and acting like a kid again as my girls and I tear into a new set.
So, thank you, for your splendid reviews-so much better to read than yahoo news or cnn. Long live Lego.