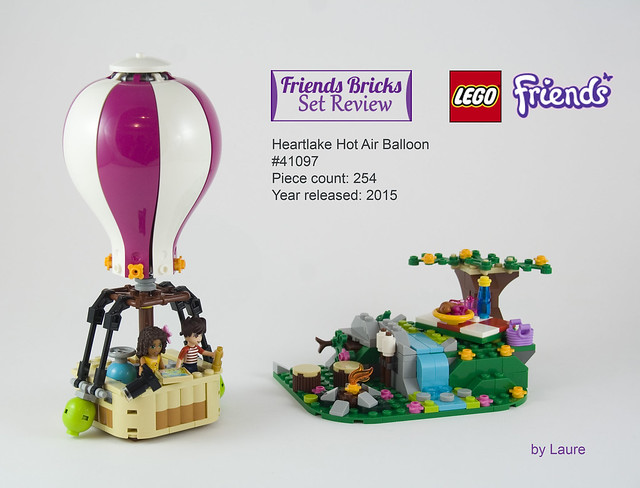 Andrea has teamed up with her pal Noah to go on a special excursion! They made reservations for a whole day trip flying in a hot air balloon!

The FriendsBricks community wishes to thank TLG’s CEE Team for generous support of this set to review and share with fans.

Box front and back: 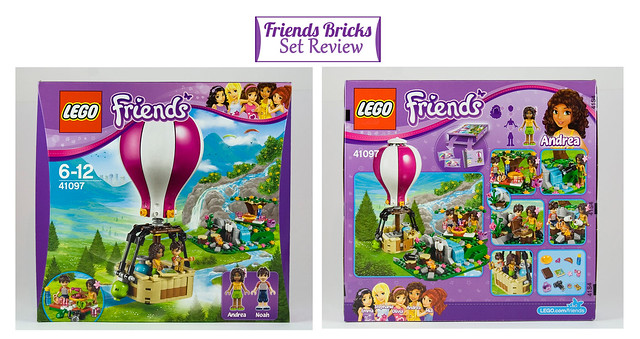 Andrea and Noah are flying over a lush valley inside the star of the set, the hot air balloon. We have a glimpse of Heartlake City in the background. There is also a campsite near a small water cascade. On the back of the box, it looks like there is plenty to see and do: pic-nic, campfire with marshmallows, wildlife, a treasure in a book! 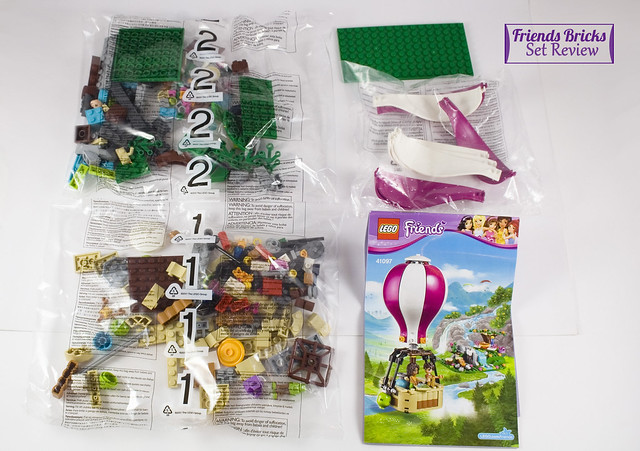 The box contains one booklet, one 8x16 baseplate, two numbered bags, and one bag containing what look to be the parts for the balloon. As you can see, there are no stickers. 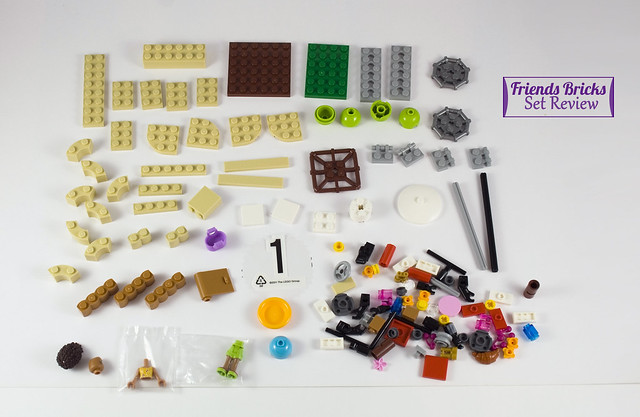 Here is the content of the first bag. There are neat pieces, like octogonal silver plates, lime green domes and inverted domes, a few medium nougat coloured bricks including a door, tan 2x2 macaronis… 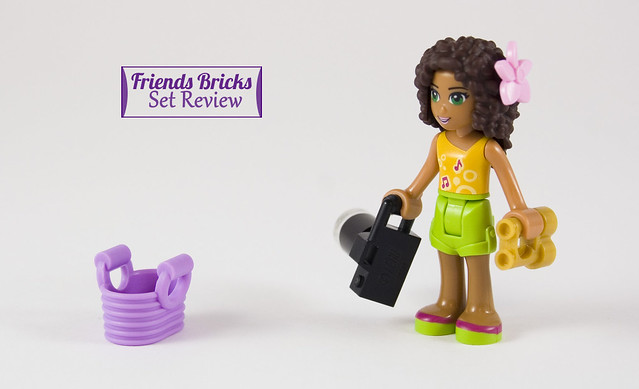 We start by building the minidoll. Here, Andrea with a new star/flower hair clip, and holding a camera and binoculars. Following is a detailed view of the figurine: 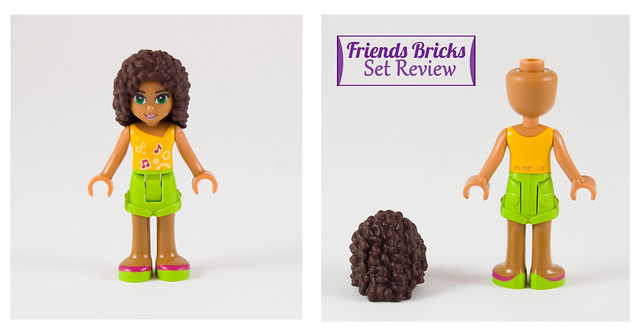 Yes those are new trouser shorts! 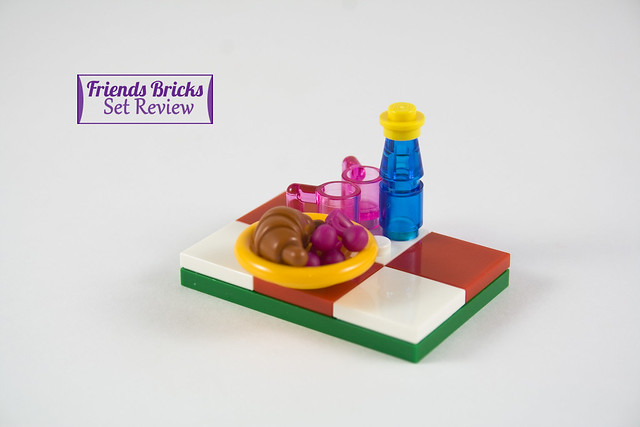 You can't continue on an empty stomach, so next is a pic-nic sheet with water and snack (I guess they will have to share the croissant!!)

Now for some more serious building. The hot air balloon. It is a fairly simple build, but also very clever, as you will see later. They haven't forgotten the gas tank. Forgive me for not being a balloon expert, but I am just realizing now there is no flame action going on!
The door is pretty neat, but there is only one, so you won't be building a car with it later on. That's too bad! 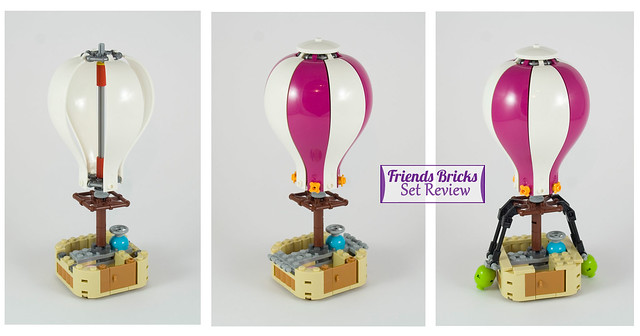 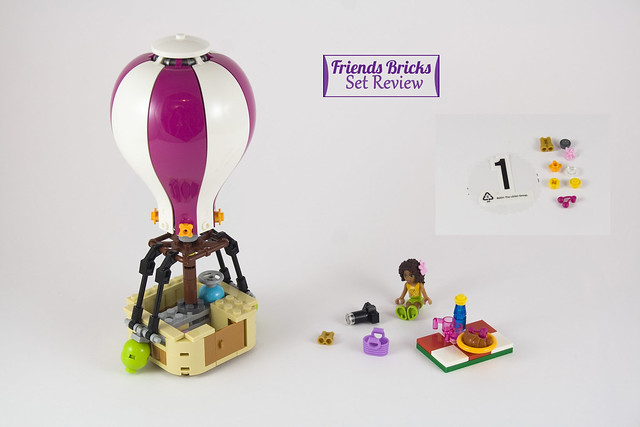 Here is bag n°1 in its entirety, including spare parts. The hot air balloon, along with the pic-nic area. 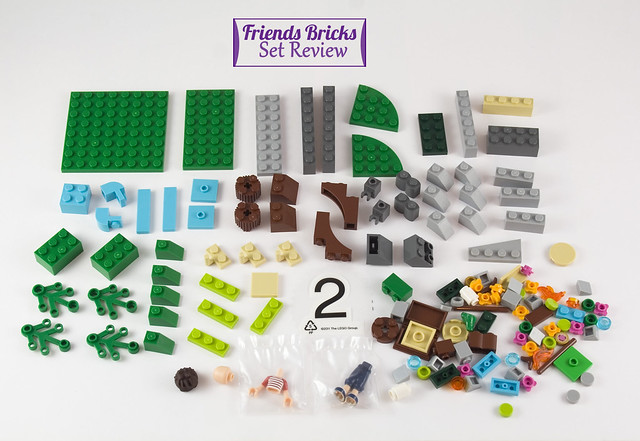 It smells like mountains, trees and greenery! I like the two (relatively) new arches in reddish brown! 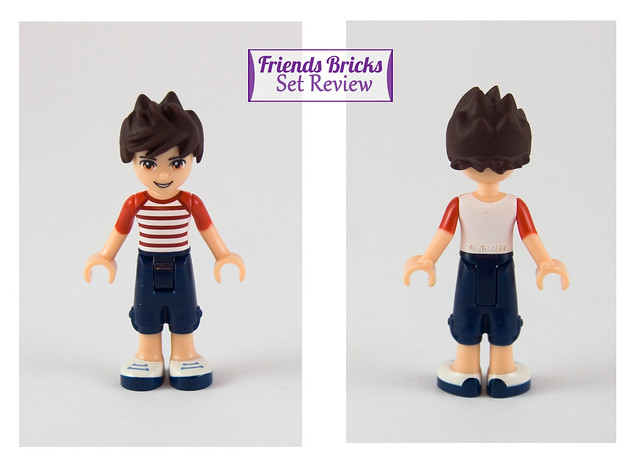 As with the first bag, we start with the minidoll. Noah is wearing a new shirt, which I find rather pleasing. It can suit a baseball jersey as well as a sailor's. His hair appeared on a Ninjago minifigure, but is pretty new (Kai). It is the same consistency as other Friends hairs, but it has no hole for clip-ins. Not that we would necessarily want to put bows in his hair, but maybe sunglasses?

Next up is the mountain area. Baseplates first, then we start building up the walls (if I may say so!) and cascade. 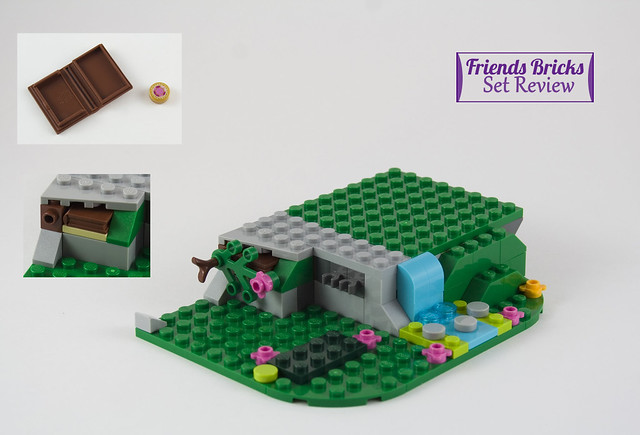 Add a few plates for the upper story plateau. And cover up the secret hideout! Inside the book is some kind of treasure, the printed tile seems to represent jewelry: a gem with some motifs around it. Incognito!!

We finish up the river, build the campfire, start the tree… 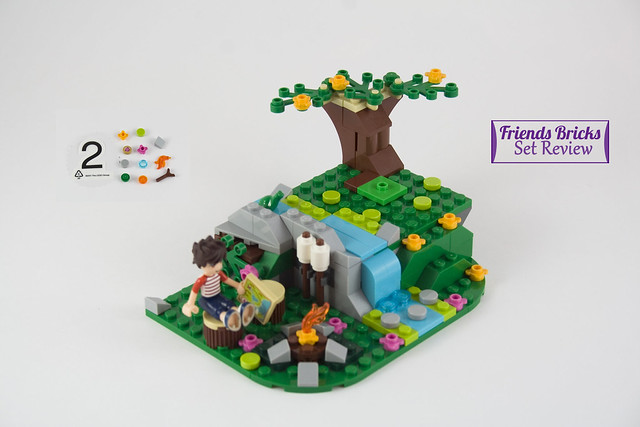 And here is bag number two in its entirety, including spare parts. Noah is studying his map, how thoughtful!! There is a little frog.
I am a little bummed, the tree looks unfinished. I like how the leaves are attached to the tan modified plates with bars, but something is definitely missing here! 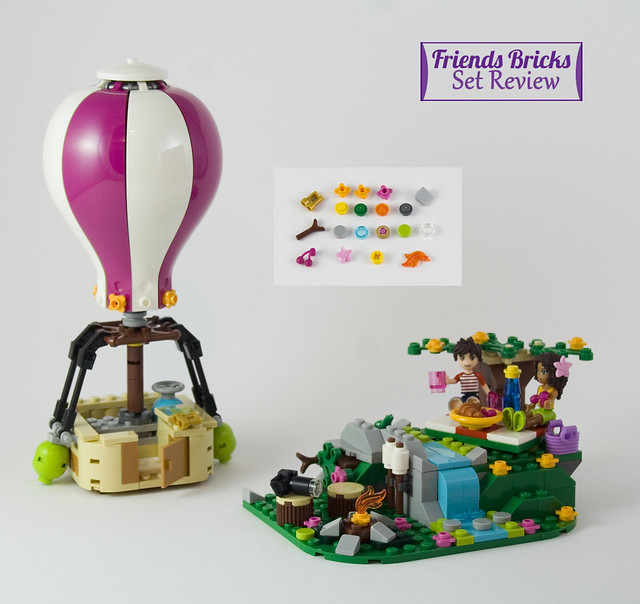 And we're done! Here is the entire set with all the spare parts. Mostly all different kinds of 1x1 plates.
The pic-nic area clips on to the 2x2 jumper on top of the mountain. There are plenty things to do like finding hidden treasures, burning up marshmallows and photographing frogs… 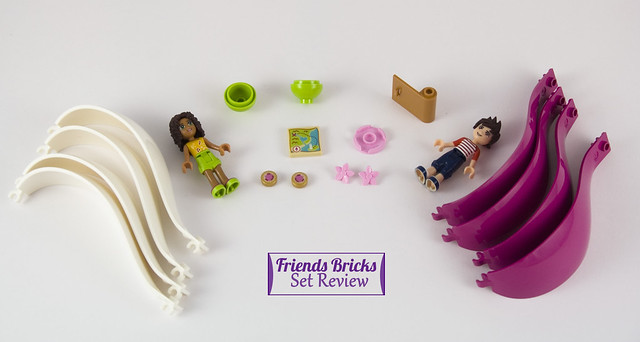 Here are all the new parts included in this set. Most important are the cloth pieces for the hot air balloon! I wonder what other kinds of creations people with come up with using these piece!
Andrea's shorts, Noah's top.
The inverted lime green domes, the nougat door, some printed tiles
The pink round 2x2 tile finally comes in its new version, with a round hole in the middle instead of a cross.
Finally, the new hair clips. There haven't been new ones in a while, it seems, so that's neat. 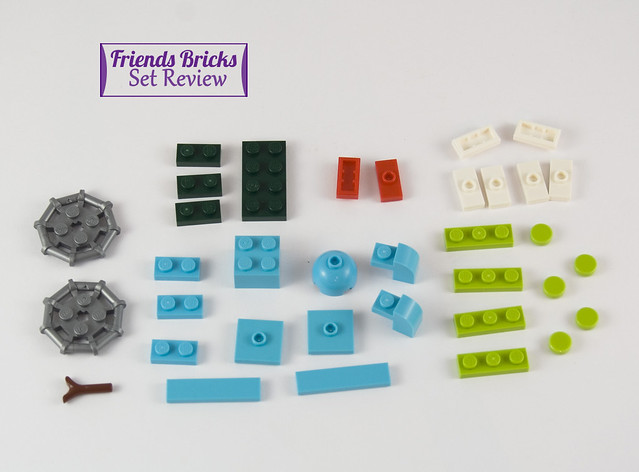 Other interesting pieces include:
Thoughts:
Although we're still in and around Heartlake City, designers have come up with an excellent and original idea with this balloon. The mountain area might seem a little superfluous considering how cool the balloon is, but the whole set gives you all possibilities for a day excursion in the outskirts of the City.
I heard a rumor concerning new parts that says whenever a new reference is created an old one disappears. It makes me wonder about those big balloon pieces. But hey, they're pretty awesome, aren't they!
_______________
FriendsBricks.com
Posted by fujiia