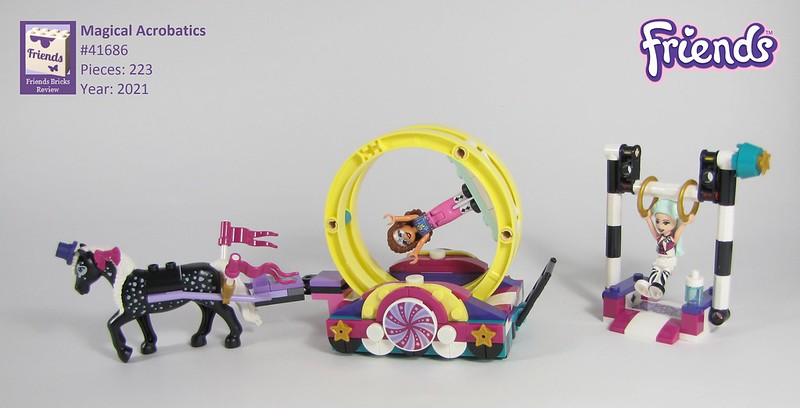 A small acrobatics parade and stunts is just the right magic to make anyone smile! Let's see what performances Olivia and Stella add to the Magical Funfair! 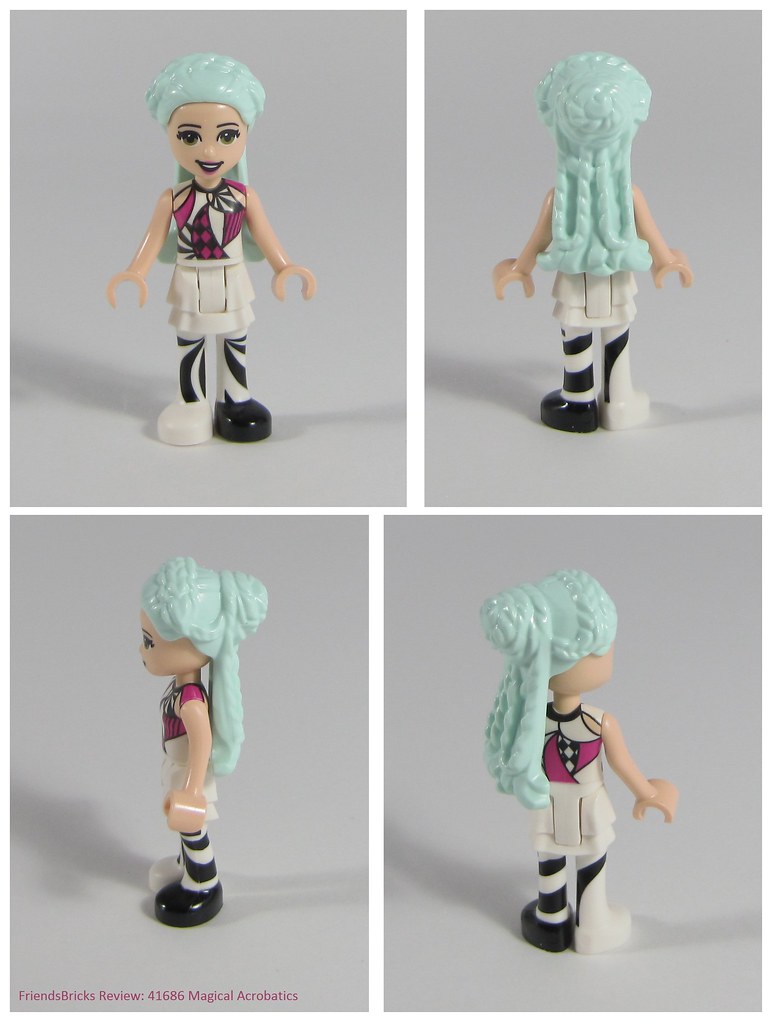 Stella is a new mini-doll for the Magical Funfair with olive green eyes and aqua hair pulled back in a bun with braids. It's hard plastic and first appeared in brown in Star Wars.
Her kaleidoscope style graphics in black, white and magenta have cutouts which continue around her back. The overall bold style of different colors and leg patterns is perfect for magic shows and carnivals. 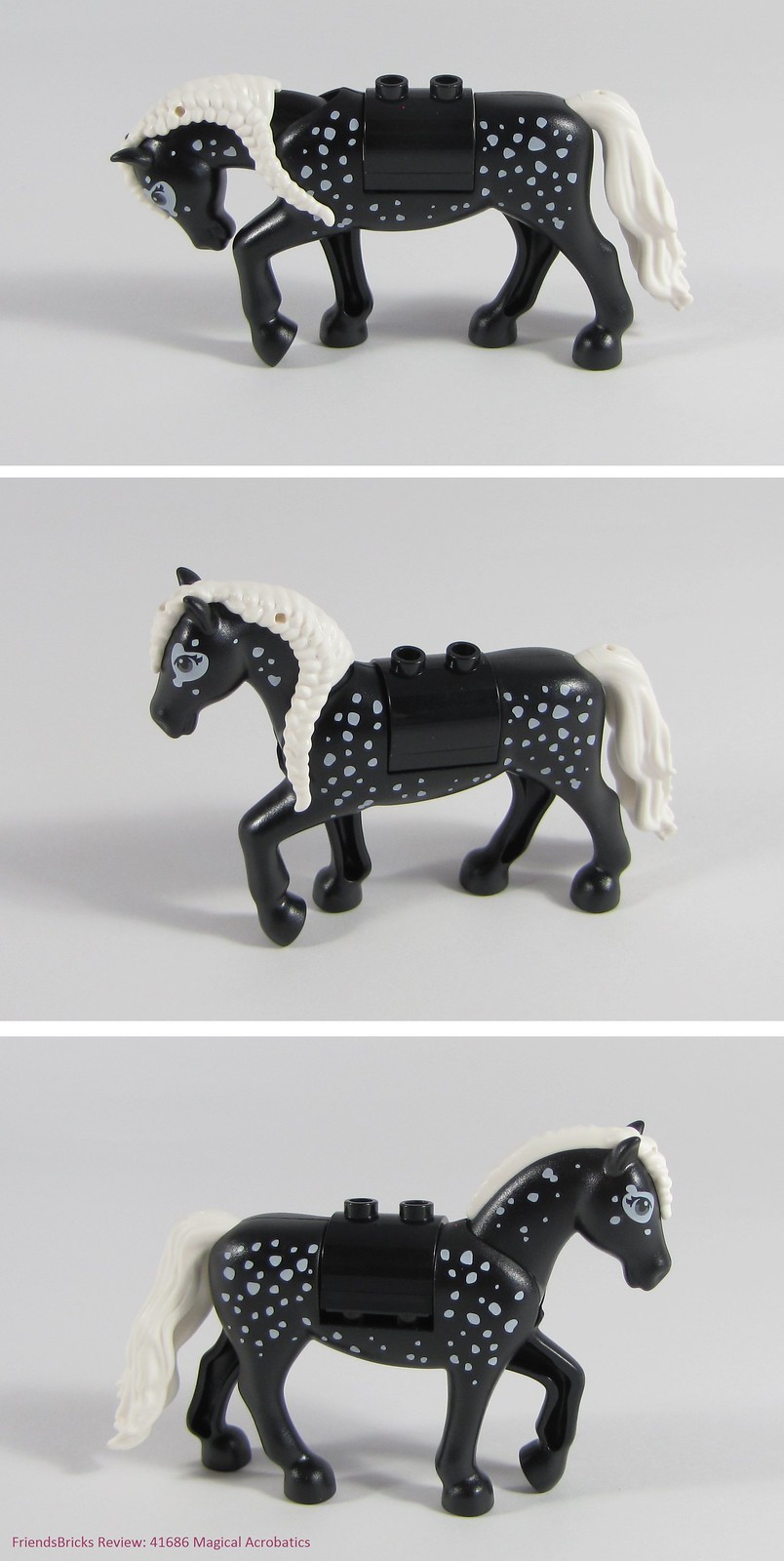 The black spotted grey horse has a slight heart mark over the left eye with a rubbery braided white mane. The head can move up and down, which was a new feature in 2021.
There is a black 2x2 tile with center stud under the 2x2 bow brick to form its back. 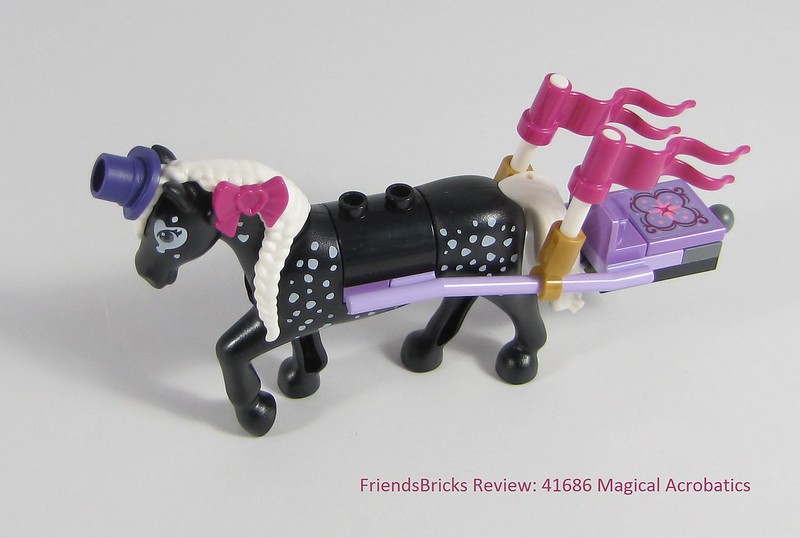 The Magic Funfair dark purple Tophat and magenta bow make this beautiful horse even more so. We remove that tile to attach the Lavender harness (thill for gig), which is rare in this color. The seat for a mini-doll with foothold attaches to the ball plate and get a lovely cushion sticker. 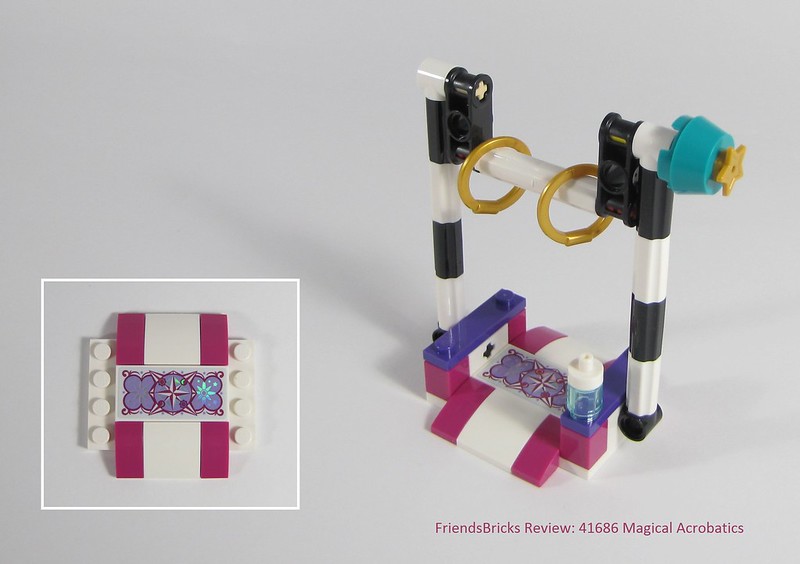 The iridescent stickers change colors when viewed at different angles. It's more lovely in person. The Teal knob (2x2 round slope brick) for rotating the bar is rare in only 3 other sets.
The whole rings acrobatic bar assembly builds very quickly; with red Technic cross axle pieces connecting the white and black cross axle extension parts -- like a candy cane. 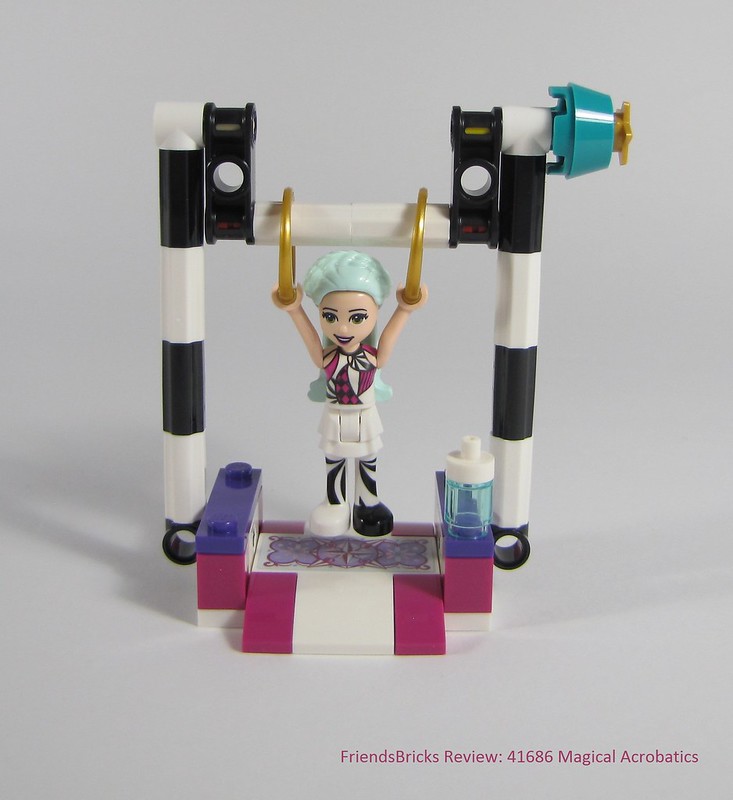 Now Stella can try it out. The best way for her to flip all the way around is with her legs bent to give a leading edge. Still, you need to give the knob a good twist! 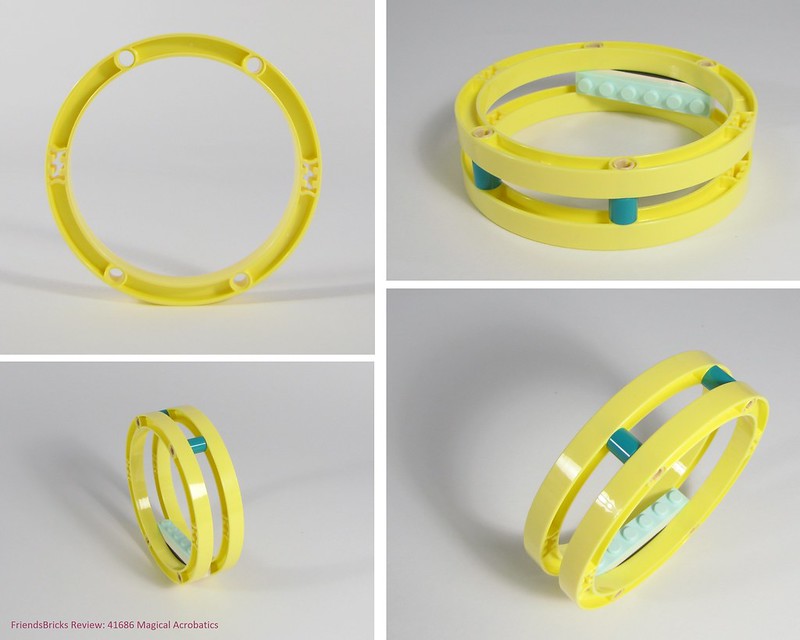 We connect two of the new Cool yellow Technic 11x11 circle beams using pins with Teal 1x1 beams (rare) and plates with side hole for attaching a small aqua plate. 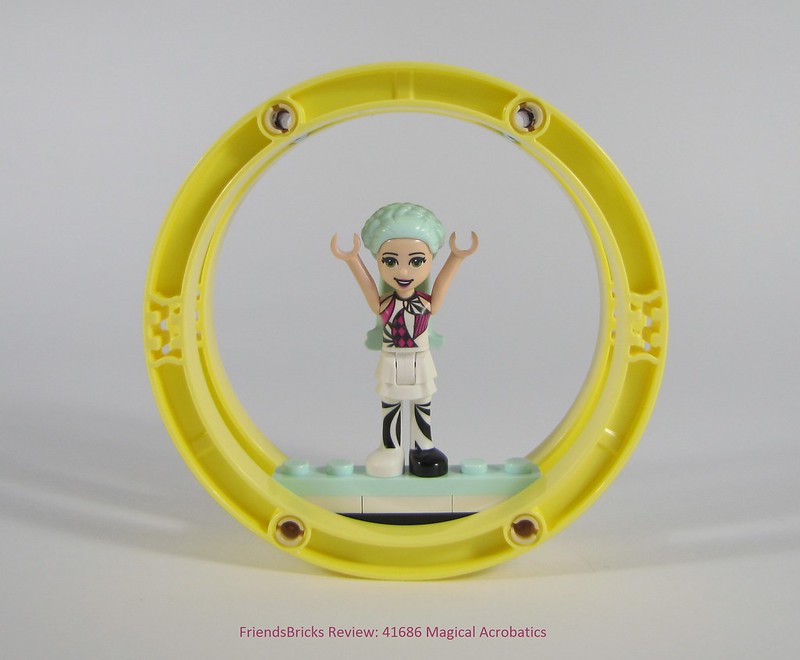 Stella is ready for a test spin! At this point, you can spin it like a top (really fast) to simulate a sphere ride -- and it breaks several planes doing so. Super fun "instant play" for sure!

Everything bag 1 parts builds. The black 2x2 with center stud is used for under the horse's back hump when the Lavender harness is not attached.
Spare parts are typical small, except for the Teal 1x1 beam which is rare and in only 4 other sets. 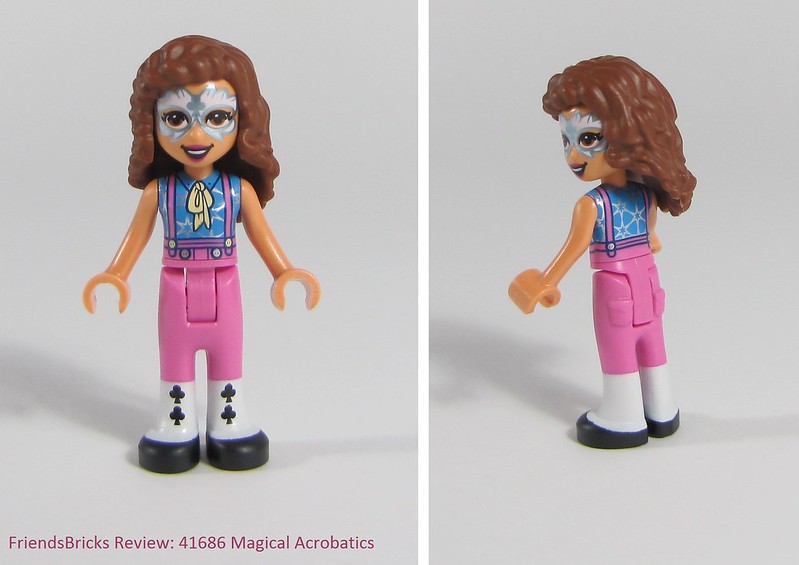 Olivia has her face painted for the funfair with a feathery spade motif in shimmery blue. Her torso seems somewhat a clown-like outfit; the starburst pattern and straps with buttons continue around her back.
Her colors of medium azure, dark pink and cool yellow have made it to her acrobatics attire -- and the spade adorned boots finish it off. 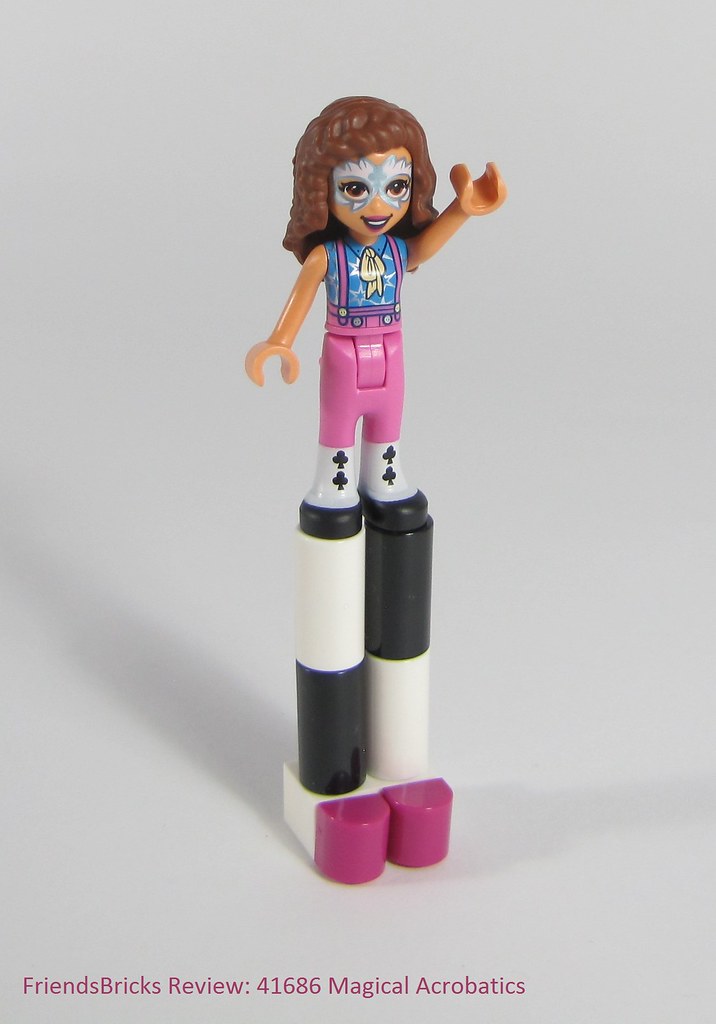 Straight away Olivia takes to the stilts! 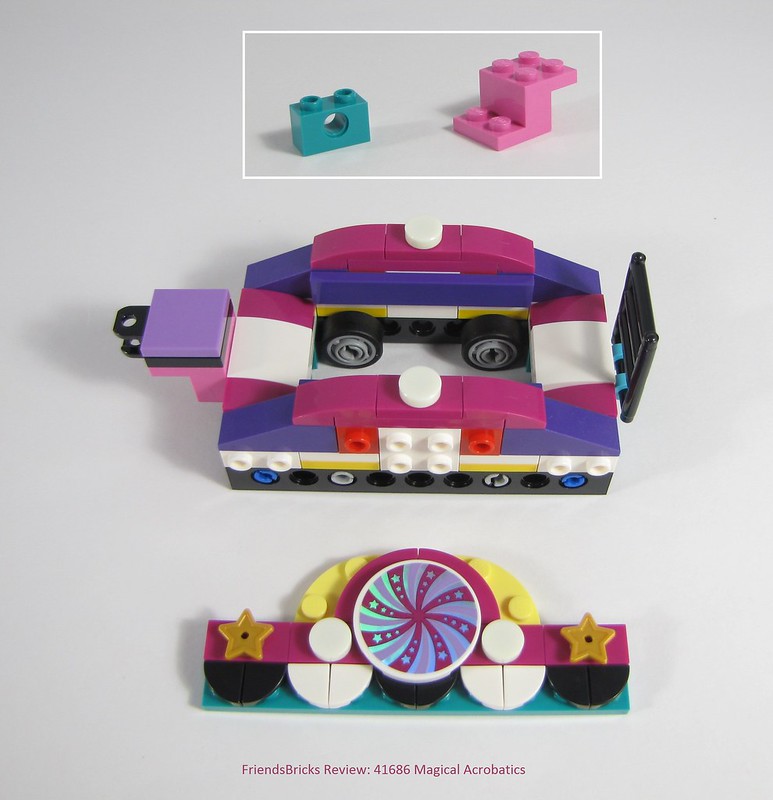 The float for pulling the sphere uses recolored in Teal and rare 1x2 Technic bricks with hole. The 2x3x1 1/3 brick with plate (step) in dark pink is rare and only otherwise in HLC Park.
Two sides are built then attached together providing recess for the Technic circle beams to sit in and on the smooth rubbery tires for rotation. The slope bricks help it stay inside the float, while allowing free movement.
The skirt sides that hide all that -- yet tiled to look like wheels -- are separate sections we attach. The center shimmery pinwheel sticker is flanked by 2 glow-in-the-dark "white glow" 1x1 round tiles, which are rare. 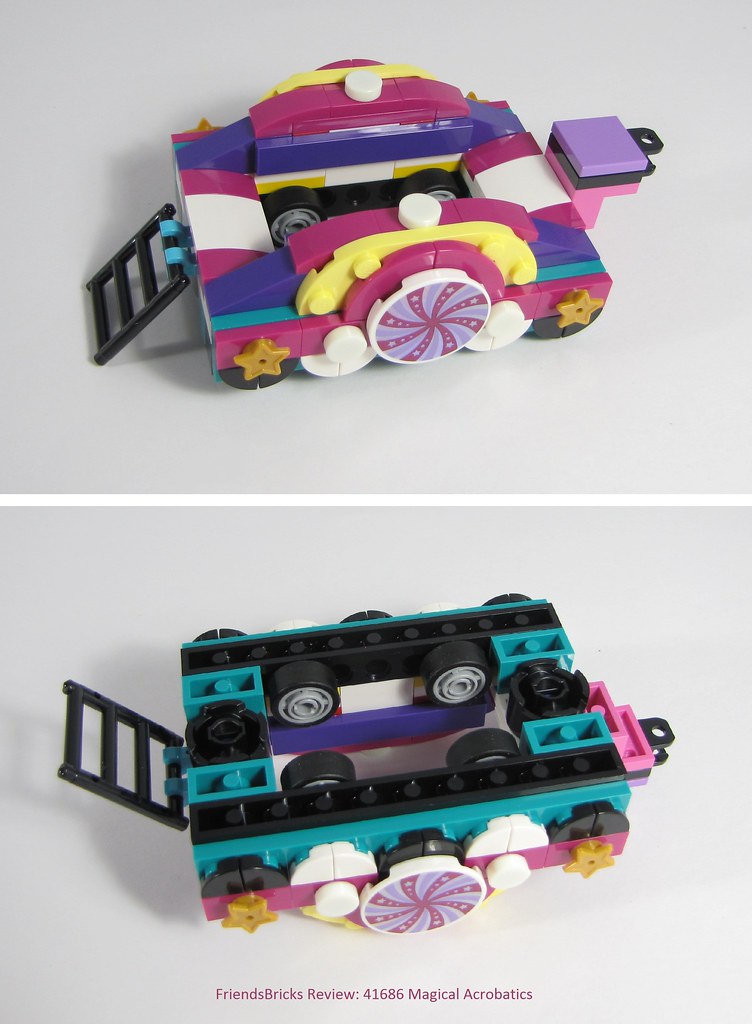 With the float's skirts attached, the socket for the ball on the horse harness and a step ladder for climbing up to the platform are installed. 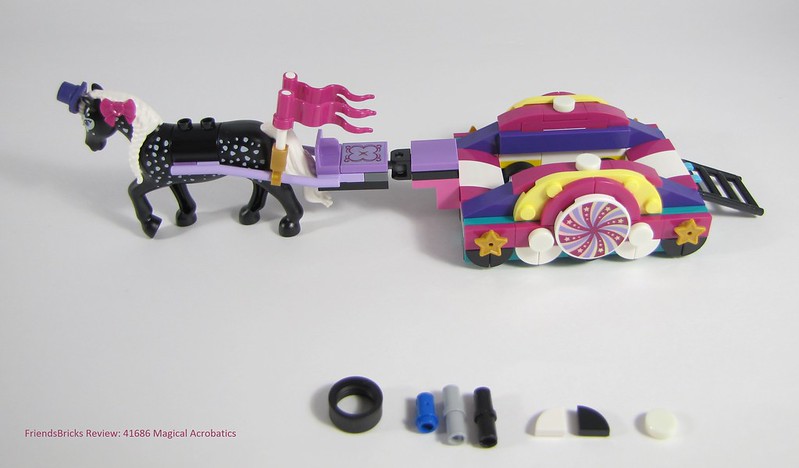 The ball and socket connection allows the horse to pull the float. Bag 2 spares include a tire and white glow 1x1 round tile. 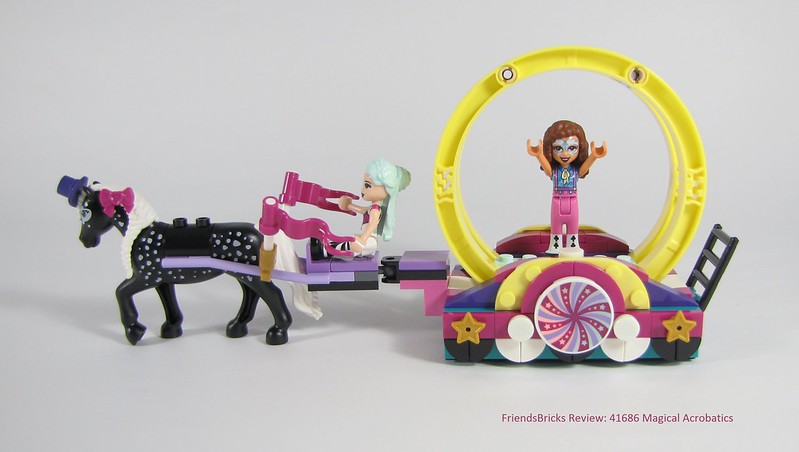 With the Technic circle assembly seated in the float, Olivia is ready to spin -- as the action of the horse pulling the float rotates the tires -- thus rotating the beams in the opposite direction.
This would make a fun lesson on measuring the circumference of it by laying out a ruler along the path. 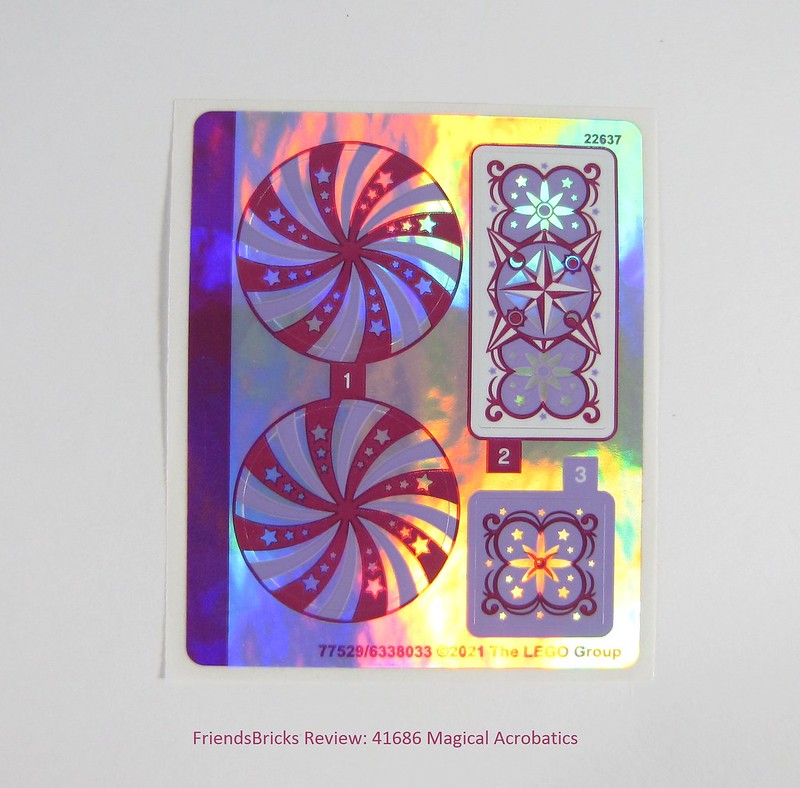 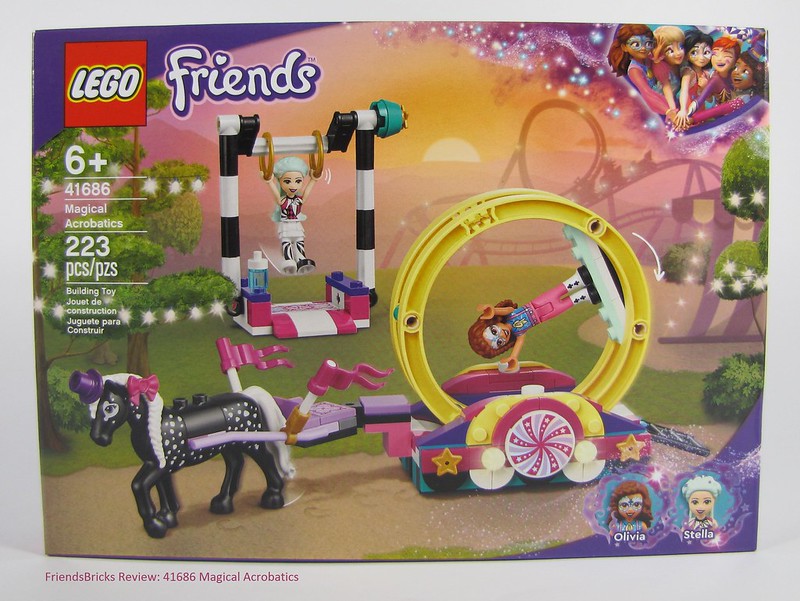 Box front: Acrobatics in action with the rest of the Magical Funfair in the background. The BFF heart has the 5 Friends in their funfair outfits. I like all the twinkling lights.
This box has no waistline curves, yet the graphics do carry around to the sides. 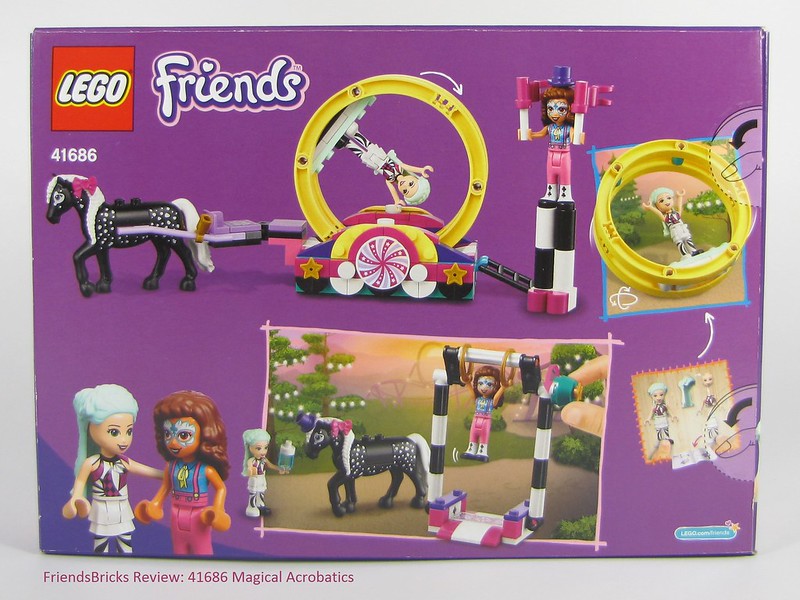 Box back: More acrobatics stunts you can do with this set, including using the circle beam contraption as a sphere that can rotate in several directions -- as Stella shows in the upper right inset.
The parts list can be found on LEGO's instructions page. 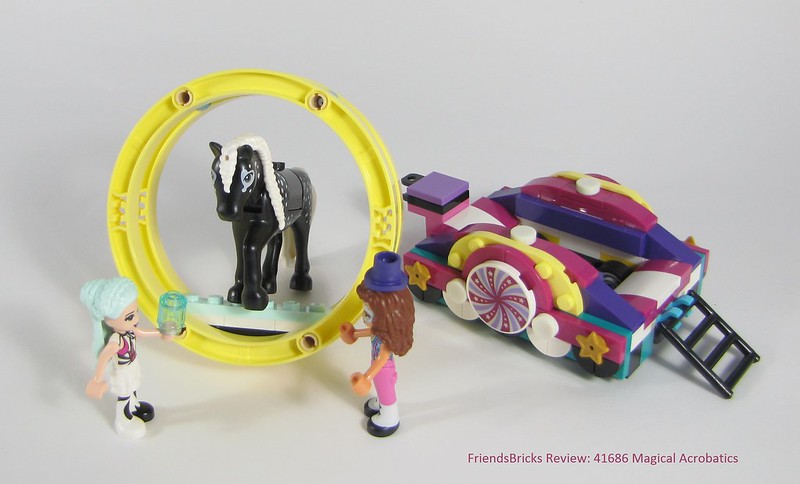 Allowing horses to get familiar with what they are pulling it very important. Otherwise they can get spooked by the sound and visuals as they move.
Stella is assuring this beautiful creature that the ring is safe by offering water as a reward.

This small set provides not only fun play functions, yet also inventive use of the Technic beam to teach math and physics. This has been accomplished with visually appealing parts and design.

It may be an overlooked set by some AFOLs, due to its size or topic -- however, it packs in interactive features with nice and useful parts.

The overall collection of colors and graphics of the Magical Funfair takes on a very different feel when you are building the sets in person. That the entire sub-theme includes glow-in-the-dark elements makes me wish I had this as a kid! What fun to build a bed sheet tent and see the glow!

Moving parts with Technic pieces has always been a part of Friends; some LEGO fans do forget or don't realize this aspect. I think this small funfair set adds just the right amount of magic to help any fan enjoy the build, play, and techniques. The variety of parts sparked imagination for me!


Disclaimer:
This set was provided by The LEGO Group for the purpose of sharing set details with fans.
Opinions provided here solely reflect those of our reviewer.
Photographs are property of FriendsBricks and are not directed by TLG in any fashion.